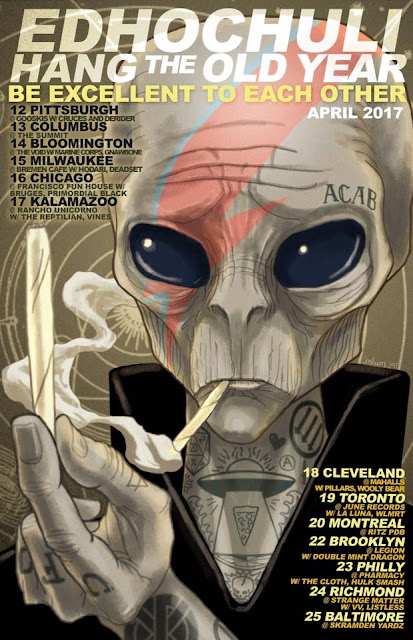 This is a little late coming, so I apologize for that. I love EDHOCHULI. Like, a lot. I've seen them four or five times in the last four years and have been continually blown away by their live performances. They are also a bunch of party-enthusiast sweethearts that I am usually able to chill hard with, so this was a weird show for my wife and I as it was our last (as well as Lisa's first) time seeing EDHOCHULI in Canada, and likely ever. I also met the fellas in HANG THE OLD YEAR and they were awesome, to boot. So here is a quick overview of the bands I actually had time to see.

HANG THE OLD YEAR
I'm not really sure how to describe this band's sound. I guess there's a lot rooted in rock, metal and post-hardcore but even that would be pigeonholing. From 2:30 onward in the video below you'll hear some awesome riffs and witness an intense live performance. The band was kind enough to give me their new 12" LP called 'The Incessant Hum', which is more great interplay with the dueling guitars and double vocals, not to mention the drums and bass. I can see the crossover that they have with Edhochuli and understand why the bands meshed so well on tour.
Bandcamp
Facebook

EDHOCHULI
I love this band. I love the members. I love the releases. I love the shows. Uhhhhhuuuuhuuhuhuh. They played a killer set that included "Erase the Past", "Filibuster", a track off of their ST and two brands spankin' new songs, both of which conclude close to the 10-minute mark. I was able to catch one of the two new songs but, as good as this song is (embedded below), the one I opted not to video was even better. If you are interested in hearing searing hardcore and screamo melded beautifully with Thin Lizzy-inspired, mathy, classic rock. Whatever their next release is will almost undoubtedly be in my top 5 of the year. Hot damn, I'm gonna miss y'all. <3

LA LUNA
LA LUNA closed the show in excellent fashion, with the power going out just a minute into their first song, if that gives you any indication. It was a truly commanding performance, especially with the song I've embedded below for your viewing pleasure. You can't get much better spoken word, building, epic screamo.