Band: THE TRAGEDY
Genres: Punk / Hardcore / Post-Hardcore / Emo / Metalcore / Post-Metal
Related artists: The World That Summer, You, Me And The Machine, Monster Fever, Go-Go Gorillas, Your Least Favourite Friend, The Serpent And The Siren and Randall Minus One.
Country: Exeter/London, Ontario CANADA
Years Active: 2003-2008
Song: "Black Quills in Flames"
Album: "Prologues"
Year: 2008
For fans of: Circle Takes The Square, Ed Gein, PG.99, The World That Summer, City Of Caterpillar, Thursday, The Expectorated Sequence, Jude The Obscure and Hank Chinaski.

I have a friend named Jesse Stratton. He is many things. One of which is a drummer. We met at a Life In Vacuum and Joliette show at the now displaced Homegrown Hamilton, linked here. The show was on August 4th, 2015 and by October 22nd of that same year we had our first show in a band together, called The World That Summer. Somewhere in August when we started our five-person collection of beards, we created an online chat group and discussed influences and whatnot. We also mentioned bands that we are/were active in. Jesse mentioned that in addition to his current rock/pop You, Me And The Machine as well as a Halloween pop group Monster Fever, he played drums for two years in a screamy hardcore band in the mid-2000s called THE TRAGEDY. I harassed him enough that not only did he send me the songs, but he also answered some questions I had about the band, touring and the album that was never properly released...UNTIL TODAY!!! That's right...


This is the premiere of the THE TRAGEDY's 'Prologues' LP, recorded back in 2008.

Honestly, I find THE TRAGEDY very difficult to describe, as they combine elements of emo, metalcore, post-rock, post-hardcore and a tad of screamo but never just one of them, it seems. Jesse mentioned relatively obvious influences such as Circle Takes The Square and Ed Gein, as well as other inspirations like City Of Caterpillar, The Number Twelve Looks Like You, From Autumn To Ashes and I Hate Sally. The song "A Forty of Jack and the Creature from the Black Lagoon" from the 2007 'Run Girl, Run' is probably my favourite of the band's songs, as it is the heaviest, fastest and hardest of all of their stuff. Featuring maniacal screaming and gutteral growls, the grindy metalcore is closer to Ed Gein and The Expectorated Sequence than anything I would label as post-hardcore.

Here is the part where I review the 'Prologues' LP. Opener "Black Quills on Sorrowed Wings" goes for a piano intro before transitioning into some nice post-hardcore with dual snarling and screaming from the one-to-two minute mark. By 3:30 we are met with massive chugs that bring us to the spacey, epic and explosive conclusion. "The Fields of Autumn" is pretty lengthy, clocking in at 7:41. The first two minutes are a driving post-rock/emo buildup with passionately spoken/screamed vocals and is easily one of the highlights of the album. The song continues through a vast amount of parts, genres and moods, generally opting for a juxtaposition of screaming and chill, post-rock instrumentals that sometimes veer into post-hardcore territory. Not all that different in form and execution, "Angels in the Oilfields" follows at a whopping 10:33. This track begins with a very somber opening, eventually incorporating distant, spoken-word vocals and some subtle singing. By 3:30 the vocals and instrumentals begin a noticeable trek uphill until they reach the peak at 5:30, take in the view and begin an angry descent back down at 6:13 that gets pretty wild after 6:30 and reaches its climax post-7:00. "The Sun in the Sewer Grate" begins like early 2000s post-rock/emo with a splash of post-hardcore that includes some very cool drums and clean guitars from 1:17-1:33. Afterwards the song takes a slightly heavier approach but generally relies on avoiding distortion so it's got a slightly Storm The Bastille feel on the one instrument, in particular, but the song itself comes across like Sunny Day Real Estate mixed with early The Juliana Theory and is cool but the lyrics are almost crazy number driven. What must be the centerpiece of the album, "The Monolith" is as imposing as the title suggests, weighing in at 8:48, it begins not unlike a punkier and less metal Respire. Over its duration there are certainly a myriad of styles and angles going on, but this song is known to me for one thing more than anything else, and that's the massive explosion and subsequent fallout of the band's heaviest material ever recorded. It also happens to be mine and Jesse's favourite. This pummeling metalcore section is birthed halfway through, but really hits full steam at 5:29 with demonic shrieking followed by chugs on speed and the repetitive chanting of "light it up!" that peaks right before seven minutes. "The Battle of St. Jude" is has more singing but that's buried beneath hellishly dark breakdowns and...what is that? Synths or a choir? Whatever it is, it works. Closer "Black Quills in Flames" is an excellent representation of what the band was able to do. Despite being recorded last, this thing sounds pretty powerful and definitely a fitting closer, although "The Monolith" seems like a more obvious choice, but then again I don't know the story or the lyrics so shutup, me.

There you have it. Well, my opinions, at least. Below are some facts according to Jesse, who was kind enough to answer 10 questions about THE TRAGEDY. If you crave and need more Jesse we also did a podcast together that you can stream/download for free right here.


1) Tell us about the origins of THE TRAGEDY from your perspective.
The Tragedy actually began as The Tapdance Tragedy in Exeter, Ontario around 2003. Founding members Clint, Derek, Martin and Mike. The band played mostly locally...house parties and other similar low-key shows. They did manage to host a successful one-day "fest" at the Exeter Agricultural Building. After high school, Clint, Derek and Martin moved to London to go to college/university and continued as a three-piece. Clint switched from bass to lead guitar and they replaced the original guitarist (who stayed in Exeter) with Darren on bass.

2) What led to you joining the band? 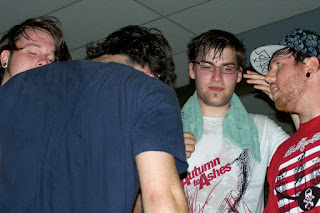 The band was refining their sound and that required a different style of drummer. I was listening to a lot of screamo/post-hardcore at the time and had always expressed interest in playing with them if the opportunity arose.

3) Was the style (and what style would you call it?) one you were comfortable with and listened to?
I think the sound could be attributed to post-metal, post-hardcore, screamo and the like. It was certainly a lot more thematic and heavy compared to some of the more contemporary, main-stream screamo I was listening to, but the challenge of playing drums in a band like that was what really drew me in. The energy was also incredible. We routinely exhausted ourselves during live performances because we all put so much into the songs, physically and emotionally.

4) What were the band individual and collective influences? Did these tend to clash or bring the music together?
Early on (as with most bands) individual influences came from all over the place including classic rock and metal, jazz, punk rock and progressive metal. However, as the band discovered other acts such as Horse the Band, Ed Gein, Circle Takes the Square and Heavy Heavy, Low Low a much more definitive sound took shape. Certainly, around the time that the lineup started changing, there were conflicts of taste. I think that's why once Darren and I joined the band everything really clicked.

5) What kind of bands did you play with? Any interesting show stories?
We played with a lot of local London and surrounding area bands at the time (2006-2008). From what we can recall, we played with bands like Nothing Left for Tomorrow, Fuck the Facts, Jakartah, A Dying Melody, Pardon My Goat and Farewell to Freeway.

6) Tell us about THE TRAGEDY’s recorded material. What about physical releases?
There was a 4 song demo (files are lost) with the original drummer, plus a 2 song "E.P." called 'Run Girl, Run' which featured the song "Forty of Jack and the Creature from the Black Lagoon". The full length LP 'Prologues/Self Titled' only ever saw self-produced burnt CDs and shared MP3 files. The copies that exist are rare!

7) Can you tell us about the recording process for each release?
'Run, Girl Run' was recorded in my basement bedroom in college and actually turned out pretty good despite the rush it was done in. 'Prologues' was done in Derek's basement and took a lot longer. We didn't use a click track, but every song started with tracking drums along to the lead guitar. Once we had those tracks, everyone else played along to their part through headphones. There were some challenges along the way. "The Battle of Saint Jude" goes way off-time at the end due to the lack of a click...and on "The Monolith Part 2" I actually had to record the double-kick pedal in one part using my hands as I wasn't able to play at the correct tempo consistently...

8) What led to THE TRAGEDY’s dissolution?
In my opinion there were a number of factors and it all built up over a long period of time...probably 6-8 months. Firstly, there were different levels of commitment from different members. Some of us wanted to try to commit our full efforts to the band (i.e. giving up school/work/relationships) and others did not. There were internal conflicts regarding lineup, recording methods and personal relationships. The best times were had rehearsing and playing live, while all of the politics of being in a band became a chore. Once the LP recording was finished and three of us were set to graduated, the band was pretty much done.

9) In hindsight, how did THE TRAGEDY impact your life and influence your future musical tastes and endeavors?
The band I started playing in prior to The Tragedy had been experimenting with some heavier sounds, but ultimately The Tragedy introduced me to a whole bunch of stuff I had never heard of before. The level of emotion and passion involved with writing and playing was tremendous. I started listening to a lot more screamo and post-hardcore and immensely improved the technicality of my drumming.

10) What are you up nowadays? In the upcoming future?
Currently I'm playing drums in The World That Summer, and a multi-instrumentalist/vocalist for Your Least Favourite Friend which is an indi-pop/rock project with some of the guys from my old band You, Me And The Machine. Clint went on to found The Serpent And The Siren which you should check out.

THE TRAGEDY out of print mp3 discography + extras download