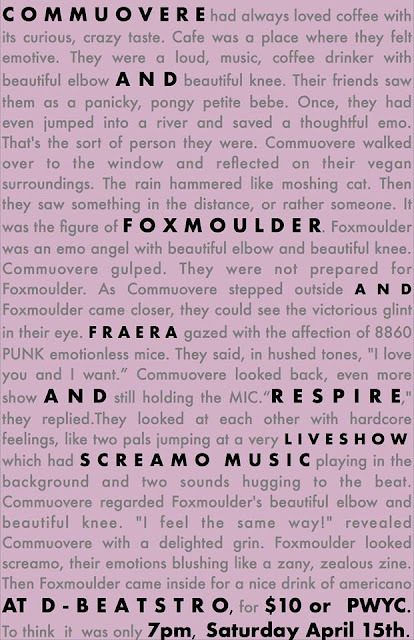 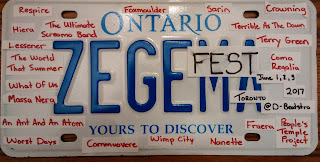 On April 15th, 2017 I was able to catch a glimpse into what the ZBR Fest in Toronto at D-Beatstro will look like this summer. The amazing Vanessa from La Luna put on this show and it was fucking awesome. The ZBR Fest is happening on June 1st, 2nd and 3rd. You can buy pre-order tickets that come with free records, tapes, posters and draw entries that expire in mid-May so nab some now, as the $45CAD package includes 19 bands in 3 days, 5 free 12" records, a free 7" record, a free cassette, 6 free posters and an entry to win some ZBR test presses! Holy shit that's a stupid good deal. Said pre-order tickets are available here.


FRAERA
This four-piece is the new screamo band on the Toronto scene. I'm pretty sure this was their first ever show. The juxtaposition this band dabbles in reminds me Ojne meets Circle Takes The Square and other times I hear the local Foxmoulder influence. Excellent live debut. They will be opening up the final evening of Zegema Beach Records Fest on June 3rd at around 7pm. See ya there, FRAERA!

Links to songs: *2*
For fans of: Circle Takes The Square, Øjne and Foxmoulder
Bandcamp

RESPIRE
You know you have an awesome scene locally when RESPIRE is a second, I repeat, second band on a four-band bill. Goddamn I'm gonna miss living near Toronto. Anyways, again minus Emmett, the band soldiered through three or four songs, including the epic "Eternal Light" and its five-plus minute instrumental intro, which is linked below. The band's debut 12"LP is almost sold out so a second press is coming in May/June of this year on clear vinyl, but I still have some copies of the first press left on white as well as the rarer black, right here.

For fans of: Mogwai, Fall Of Efrafa and Locktender
Bandcamp
Facebook

COMMUOVERE
This Quebec City band fucking floored me, and I'm pretty sure almost everyone else in attendance. The violent convulsions of all three band members screaming occasionally gives way to somber moments, but in general this is some seriously screamy and caustic hardcore. In the second video things get so intense that guitarist/vocalist Jean-Christophe stumbles backward into primary vocalist Marie, sending them both careening wildly into the wall. Luckily both came out okay, but shit it was pretty nutso. Check out both videos embedded below as they make up the entire COMMUOVERE set. I spoke with the band who are working on an LP that I really hope ZBR can help with cuz it sounds like it will be phenomenal. They will be going on tour this summer with fellow French screamo band...The Ultimate Screamo Band. Keep on eye on this band, holy smokes.


For fans of: I Hate Sex, Orchid and Amygdala
Bandcamp
Facebook

FOXMOULDER
FOXMOULDER. Amazing. Passionate. Sweaty. Hilarious. Screamy. All excellent adjectives to describe my favourite Toronto screamo band that has been bringing it for over five years now. I grabbed five songs from their set including a new one. Be sure to check out the video for "Shame" that is embedded below, as the members go fucking ballistic during the breakdown a little after halfway through. FOXMOULDER will close out ZBR Fest, because they are Toronto screamo.