UNDER A SKY SO BLUE

Today is an extra special day for me because I finally get to help release something by UNDER A SKY SO BLUE. In fact, the pre-order at Zegema Beach Records just went up right heeeeeya. 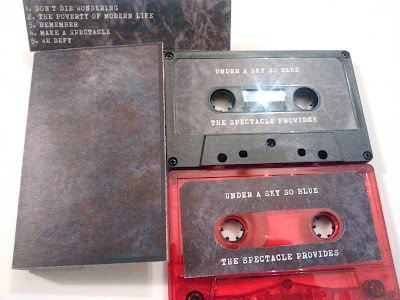 UNDER A SKY SO BLUE hail from Athens, Georgia and play angry, pissed off and abrasive as fuck screamy, metallic hardcore that isn't too far from a cross between emo-violence and a ton of bands that Thomas Schlatter has played in and, especially lyrically, could easily be likened to the soundtrack of the unfair, oppressive, sexist, racist, blindly ignorant and selfish current social/political climate. I was first introduced to the band when they sent me their 2014 'Demo' EP to be reviewed on this blog. At that time their vocalist had learned to play drums in order to get the band off of the ground and likened one of their main influences as Joshua Fit For Battle, which is going to get my attention every fucking time. Since 2014 they have gained and lost members but the acidic delivery and instrumental wall of noise remains. "Truth Is" opens the EP with tons of screaming and leads to the unreal ""United"?" which is a cathartic romp through some very Neil Perry and Joshua Fit For Battle sounding material. "Nothing is Genuine Anymore" is another banger and "Right to Well-Being" closes out a truly phenomenal demo.

Later in 2014 the band released a single song called "Within the Hourglass" on a split 5" with The Truth About Dreaming. This is a really cool song with a killer intro and an obvious focus on the bass, which has been a very prominent instrument in all of the band's releases. After that they put out another split, this time a 7" with Celebration housing two exclusive songs, the uncomfortably enjoyable "More Product, More Misery" blistering "Don't Shoot". I was very lucky and was able to see UNDER A SKY SO BLUE live at the Austin Blood Alliance in January of 2015. I met the members, was absolutely smitten and filmed about half of their set so I've linked all three videos right here: "Within the Hourglass", "More Product, More Misery" and ""United"?" as well as the full 2-day fest review here.

In 2015 UNDER A SKY SO BLUE lost a few members on amicable terms and therefore 2016 saw no releases by the band. In late 2016 the band sent me their demos for their new EP titled 'The Spectacle Provides' and I was floored. I mean, I always loved the band but the new stuff just blew me away. Seemingly perfecting their screamy emo-violence with a dash of metallic hardcore, the five songs on here are the audio equivalent of being set on fire and thoroughly enjoying it. "The Poverty of Modern Life" is a massive, dark and bottomless plunge into a collection of very angry (and rightfully so) psyches perfectly matched to a toppling take on metallic emo-violence. The close of "Make a Spectacle" is fantastically heavy, with insanely gutteral shrieks of, "What the fuck are you thinking?!?!?!". This lovely tape was released by Zegema Beach Records, Dingleberry Records, Star Rats Records and Murder On Ponce. Pre-order this gem from ZBR right here.

UNDER A SKY SO BLUE additional links