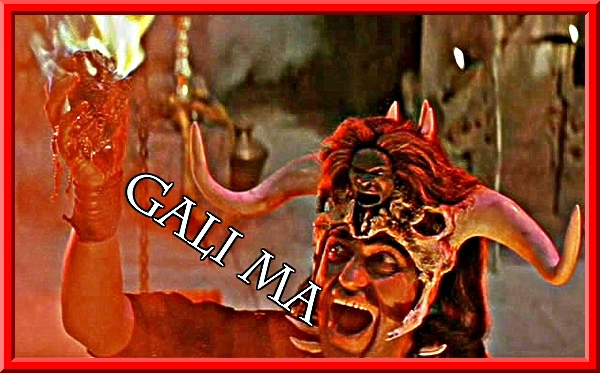 Back when I was in university, so I'd wager probably late 2003, my friend Chris Wynne asked me if I wanted to add some vocals to their band's four demo songs. I felt a little weird being a vocalist (I'd only ever done bass) but I had nothing to worry about as we never had a practice all together. I laid down my first real attempt at screaming over proper music with three of those four tracks. Prior to this I had only done vocals to my own solo work which was just bass and vocals, so to layer my screams over very well written music with drums, bass and two guitars was something I revelled in. Chris also asked me to name the band and songs so I went with GALI MA, a take on the Indiana Jones and the Temple of Doom film when the bad guy rips out some dude's heart and starts chanting "Kali ma, shadikday," or something of the sort. I'm not really going to talk much about the songs as being a part of them makes me unfit to review it. I can, however, give some quick bits of info regarding themes and lyrics. Before I do, I should mention the players, who were:

"An Ode to Brian Black From a Malfunctioning Me"
This song is about my grade 5-8 years when I made fun of another child at my school. I deeply resented myself in university once remembering/realizing what I had done. The title is taken from a group project I did with him and my best friend who, at the time, was also friends with this child. At the time we were basically quoting Robocop when he has a malfunction and loses power. I was a fucking asshole, but I don't do that shit anymore because I learned what fucking empathy is. This was the first song I put vocals to. I personally really like the heavy, breakdown ending.
LYRICS: Flickers coat my concussion. Well I guess this obsession clears our throats and severs our human connection as this misdirection of my heart destoys my self respect. I was so young. Prepubescent sniveling cockroach, I spoke to scar - because that's what the world dumped on me? Well that's no fucking excuse. I guess I should have had more sense with these things. I said, "I hope you die." Now that wasn't very nice. Why do we, as such innocent children, kill the inherent spirit? "And I can't believe that it turned out this way," was all he said. "Cut it out," was all he ever said. All he said was, "we fall."

"God vs. Bush aka The Doppleganger Effect of Persuasion"
This was one of my first forays into political songwriting. The subject matter is probably pretty obvious, but in case it's not, I basically was just comparing the control of governments and religion over the masses. Considering what's happening now in the US this seems pretty fucking tame. This was the final song that I put vocals to, and technically I never finished. The final part of the song is gibberish and I had planned on adding to it but never did. Why? I can't remember. There are some pretty cool parts in this song, but the vocals are mixed too high and the entire thing seems a bit disjointed. Regardless, that bit from 3:00 to 3:20 is probably one of the best things I've ever done in the vocal department.
LYRICS: Isn't his own portrait on the card? That sets forth the lord from his chair, the whip and the sword. He tortured to become renowned. His mouth, his mind, they all built up and then consumed him in time. Down. Grail is found. This time be careful when you mount/pound me. I wonder what happens when but you all shifty eyes decide our lives. Just avoid wind-up toys. Wait, but am I thinking of the Bush administration or of god? I guess their of the same aura. Your tangled web of lies. We'll take lies aside turn over and spread the lion and with the purposes and the laws of our lives. Same aura. As the oil king yeah. I'm dripping as the oil king slicks back hairlines back to kingdom come, all dripping with oil. Oh didn't you know that our function resides in putting the past aside? We move on but our soul is in the ground. And I'll find you this time. And if I don't criticize - I'm dead if I don't criticize what's in my mind ---- then it's all gibberish, I have no idea what I was screaming.