Full review and videos below. 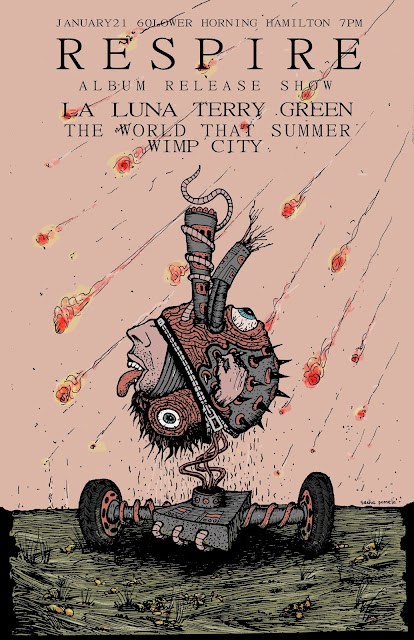 THE WORLD THAT SUMMER
The band I scream for in Hamilton opened the show nice and early. We opened with "Moth Volcano" and then played "Heat Death Parties are the Bomb, Man". Our third and fourth song are in the video embed below and are both unreleased. In fact, the third song "Voltron Division" is a totally new song and this is the first and only time we've ever played it live. I really like it, as it feels like it always builds but never quite reaches climax. The instrumentals are really fucking grooving and I tried some new stuff out vocally and think it worked out pretty well. The fourth song is our final track on the 2x12" that we should have test presses for soon and is titled "No Hugs for Lucas" which is generally a fitting closer, but you'll have to pass through the seven minutes and change of "Voltron Division" first aka our ode to Black Love.

TERRY GREEN
TERRY GREEN did what TERRY GREEN do gone did, they kicked ass. Playing in one of the members' living rooms, this was one of the best shows of my life, as every band killed it and these boys were no exception. Playing most of their upcoming 12" material from the aptly titled 'LP', these guys shred screamy post-hardcore and will definitely tickle the fancy of Gillian Carter, Van Johnson and perhaps even Alexisonfire. Check out the live video below and then jam "1" aka "Michael Soft Sam" on the new Zampler linked here!

LA LUNA
LA LUNA played third and for the second night in a row blew me socks off. Unfortunately I was outside moving stuff for the beginning of their set and by the time I got in I was confined to the doorway and couldn't see the band nor catch a decent video. I must say that I enjoyed the last two LA LUNA records but think the new material is going to blow that stuff away. Check out their recently released 12" 'Always Already' on their bandcamp page linked below. I've included a video interview with the band below in a poor attempt at making up for not getting a live video from the show.

RESPIRE
Obviously RESPIRE didn't disappoint. They never do, despite the fact that all three times they have played in Hamilton they have had a different lineup each time due to a members' prior obligations. So this time we were without Emmett on the trumpet but instead had the violinist Eslin taking part in every song. The band sounded great in such a small setting, especially the absolutely epic Eternal Nothing, embedded below. I've also updated the ZBR distro with tons of new Respire stock including a tote bag, two shirts, tapes and posters!

WIMP CITY
Local heroes WIMP CITY closed out the evening to a fucking packed living room and it was magical. I was a little far back on the couch so I handed the camera up to Jose and Nate who filmed the entire set in one video! Can't ask for more than that, thanks fellas! So, the two-piece of drums and bass/vocals ripped through nearly 10 songs of spastic and pissed off Death From Above styled punk if they were way heavier on the hardcore. As per usual, a treat.