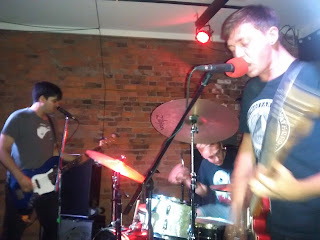 On August 4th, 2015 I was finally able to secure a venue for my buds in Life In Vacuum and their touring pals Joliette. This show was so fucking close to not happening that it brings a hella smile to my face to think that not only did we get this show going, but it was one of the best shows I've ever help put on. Below is the ordering as they played at the show which was held in Homegrown Hamilton and a huuuuuge big ups to Adam from Homegrown for getting back to me about the space. If you want to see all the videos I took, including the entire Joliette set, click here. There are 19 videos in all.

BUNT
Bunt apparently isn't an instrumental band! From the two songs I heard on bandcamp I got the impression that they ditched vocals for but this is not the case. They've got a few instrumental jams and quite the rest tag some folksy rock vocals, whether it be lyrics or "woo". Unfortunately I really feel that I got the decent songs on film but missed all the ones that made my jaw drop. Eh luck of the draw. Check out those bandcamp songs, too! Featuring a member of Slender Loris and a guy who used to work at Sonic Unyon...I think. That's pretty darn cool.
Bandcamp


MOLLY DRAG
Molly Drag played as a two-piece guitar/vocals and drums from Toronto and embrace honest, sincere and passionate punk rock/emo. I'm pretty sure Michael (vocals/guitar) generally (or perhaps just sometimes) plays solo as an acoustic/emo/punk entity under the same name. There was one song in particular that really got me a little teary eyed and the song itself was fantastic. It was about a dog that his father got following a divorce and after it died Michael saw him cry for the first time in his life. The song itself was a builder that probably eclipsed five minutes. Really good stuff. Check them out.
Bandcamp
Facebook


HOUSING
I was finally able to get Housing out to play another show and they didn't disappoint. The alternative/emo vibe is done extremely well. The band was recently signed to Mutant League Records and have a 5-song EP being released shortly. You can stream it in its entirety on the band's new soundcloud page linked here. From what I can gather this band is really young, but that will surprise the hell out of you when you hear the band. They have a very mature and structurally sound foundation that are fleshed out with excellent rock/alternative vocals over emo/keyboard rock. If the band continues on for a few years I'd be highly surprised if they didn't blow up. This is really well done, accessible music that easily transcends its genre limitations.
Soundcloud
Facebook

LIFE IN VACUUM
My wife and I both recently commented on the fact that Life In Vacuum doesn't play bad shows. Like, never. I've seen them in the double digits now and every time they are spot on and put on a killer set. Every. Fucking. Time. They blasted through a pretty long set that included the entirety of their new split with Joliette and a few songs from their previous LP '5'. This set in particular was fantastic and backed by some great balance in the sound from Thor, the sound technician. The vocals are right up there in the mix and the blend of all three band members is cohesive as fuck. I saw someone post recently that this band should be one of the most popular bands around, and I think people are starting to agree. I sure as hell do. When watching this video (and the other four LIV ones) pay particular attention to Dylan who puts on a scintillating performance not only as a musician, but watching his facial expressions and stances are entertaining as all hell. Best band. Goddamn.
Bandcamp
Facebook

JOLIETTE
Holy fuck. Seriously, I was told that these Mexican amigos were amazing live, but even that didn't prepare me for the ridiculousness that followed. With the exception of Edhochuli this was probably the most intense and engaging set I've ever witnessed. Not only did the bassist run outside with his wireless bass and play for people walking on the street, but during the last song Gaston (bass) gave his instrument to an audience member while he jumped on the other mic and let out a flurry of screams to close out their set. I don't think many people knew about Joliette in Hamilton before the show, but boy oh boy were they discussed quite a bit afterwards, followed by some show goers making posts that were oozing with respect and appreciation. Joliette, you fucking killed it. If you've never heard them check dem vids I gots. They play a pounding mix of metallic hardcore mixed with Italian screamo and it's fucking gold. Go see this band if they are ever in your vicinity. For those who don't know my interpretation of the word "vicinity", it actually means a show happening five hours or less from you, assuming you can drive, of course. If you click on the link here you can watch the full set which I've spread over five insane videos. The first two were taken with a good camera and the last three were taken with my cellphone, but it doesn't fucking matter. Again, one of the best sets I've ever seen.
Bandcamp