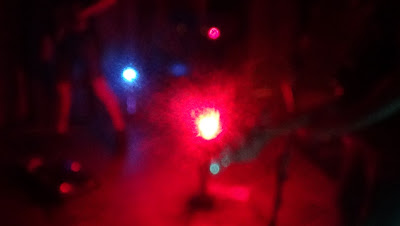 On August 5th, 2015 I headed out to Doors: Taco Joint & Metal Bar to meet up with my friends in Lord Snow. I arrived just in time to catch WIMP CITY's set, which included a vocalist and was a surprise to me as they played the Reptilian/Two Knights/Congratulations show in August of 2014 as a two piece (linked here). The menacing vocals and bass-driven instrumentals were a fitting wall of sound in the venue's tight space. You can catch Wimp City playing on August 19th, 2015 at Doors: Taco Joint & Metal Bar with Nouveau, Nanette, Terry Green and Fossil, linked here. LIZZY BOREDOM took the "stage" afterwards...a full 30+ minutes afterwards. This was a problem for me as it meant I would be unable to catch the final set of the night as I had to work in the morning and I was frequenting three shows in three nights with this being the second. The band took us on a ride through crazytown as the three-piece play a volatile and cacophonous concoction of screams and rambling. People really seemed to enjoy the band's primal presence and moved around accordingly, sometimes as punk/hardcore and other times as dark post-punk.

Last up for Dave was LORD SNOW. Hooooooo-lyyyyyyyyyy fuck. I got the full set right heeeee-yaaaaa (aka here). Check that shit out, it's unreal. Erik is easily one of, if not the best drummer right now. Niko's new material has his fingers doing some even crazier shit, and he also takes a larger role in the exchanging of vocals with Steph. Oh Steph, you are amazing; super cool, super awesome screams and how you make those bass riffs to go along with all the craziness is beyond me. Caleb (from Circle Takes The Square, Mare and Thick Piss) was there as he helped put on the show and I saw him a few times smiling in pure amazement. Yep. Lord now does that to pretty much everyone. Sorry WTCHS, twas too late for Dave. Hopefully someone nabbed a video - if so I'll post it here!


LORD SNOW
(click here to watch their full set from the same show)
Posted by Dave Norman at 18:33