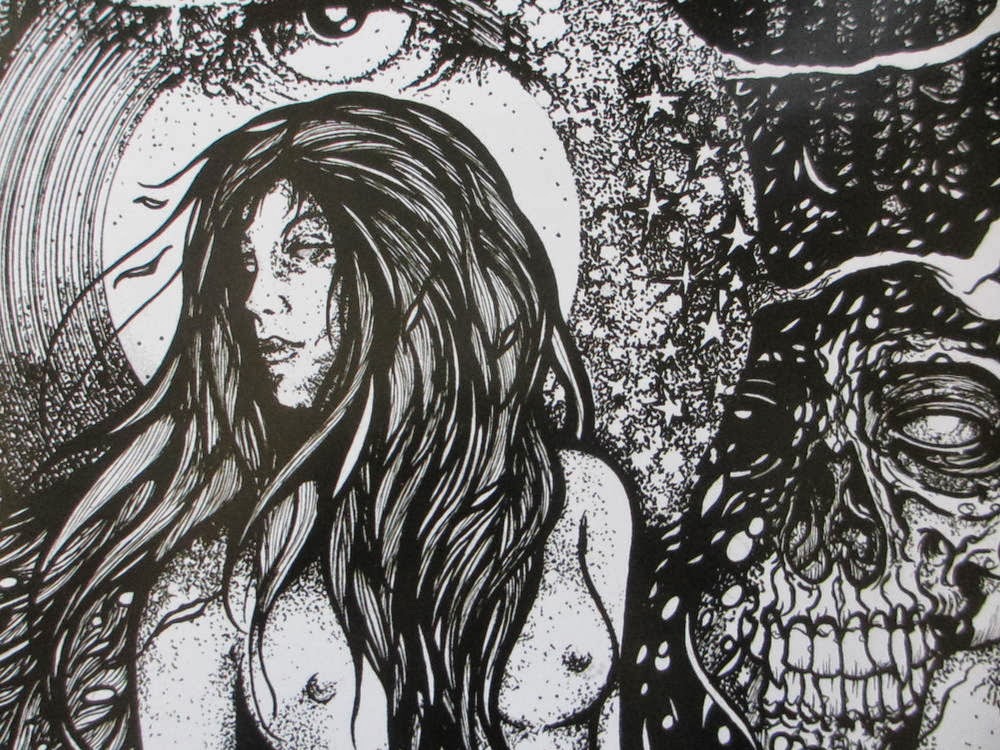 The day Dog Knights Productions posted "Kargt Landskap" I sat googly-eyed for the entire 5 and a half minutes. It was like hearing an epic and structurally sound Graf Orlock mixed with the slower atmospheric screamo moments of June Paik. The band dropped 'Still Waters Run Deep' a few months ago to rave reviews. Expect to see TOTEM SKIN on quite a few year-end-lists. If you are a fan of dual vocalists (one high screamer / one bellowing yeller) and varying instrumentals (breakneck hardcore / gloomy atmospheric screamo) then you are about to have a new favourite band. They are so good, in fact, that I contacted them about releasing something with Zegema Beach Records in the future. A track (at this point undecided) will be included on the new ZBR Zampler compilation that is being released January 1st, 2014 as Zegema will be working with the band in the near future! Following that conversation, we decided to do an interview. I asked the guys a crapload of questions and they obliged with some great answers. Check the interview below and grab their new record here.


Here listen to this nice, long track while reading the interview. (it's the one discussed in question #13)


Considering the point of this blog is to introduce people to new bands, which bands would you recommend checking out?
1) A band that recently caught my attention was Kira from the hardcore capital of Sweden, Umeå. We are doing a small weekender later in the winter and we are fortunate to play with those guys, which I'm really looking forward to! (http://kirahardcore.bandcamp.com/)

Besides tour, how do you find out about new music?
2) Usually from word of mouth and of course from different blogs, youtube etc. The internet is a great tool to find music when you're from such a remote place like Borlänge where punk barely exists.

How was the band chronologically assembled? Under what circumstances?
3) It started somewhere in the beginning of 2012. I had a few ideas that I wanted to assemble, so I asked Henrik if he could arrange some drums and vocals to. We recorded a few songs by ourselves in a basement without even rehearsing. During this process Glenn asked if he could contribute with some screaming. This resulted in our first demo/EP. Right after it was finished we continued with our second EP in the same way. We never had intentions for this project to leave that basement, but after we released our first EP we were asked to play a few shows. So we asked Sebastian and Jesper if they wanted to help us play at those shows. And after those shows we just continued rehearsing. Around spring of 2013 Jonas asked if he could play bass in the band and not long after we started writing songs for the full length that became 'Still Waters Run Deep'.

What side-projects and/or offshoots have the band members taken part in?
4) Jesper played guitar in the beginning of Ignominy. Back then they were more of a power-violence band, but since he left they have become more of a weird noise rock band, They're really cool! Henrik used to play drums in a math-metal band called Letters from the Colony. They are amazing and will release new stuff soon hopefully. Their guitarist actually used to play bass for us on two or three shows and did some vocals on our second EP.

What bands have most directly influenced TOTEM SKIN’s songs over the years?
5) I can't speak for the whole band, but without pg.99 I know this band would never have existed. Our name is from the song "Tantrum" from the Majority Rule split. And also a lot of Swedish d-beat like Martyrdöd, Accursed, Skitsystem etc.

Would you consider yourselves a screamo/grind/metal band?
6) This is a though one. I would say that Totem Skin is our definition of hardcore. We borrow a lot from those genres, but in the end it's all hardcore.

If you had to slap a genre label on TOTEM SKIN - so potential new listeners could get a good idea of your sound without hearing you, what would you label yourselves as?
7) Käng-emo. ("Käng is what we call d-beat punk here. Or crust, perhaps.")

There’s usually so much going on in your songs, so I’m wondering who generally writes the first part of a song?
8) I usually write all of our songs. We almost never write a whole song as a group. If someone has an idea we bring it to our rehearsal room and build it from there. And then Henrik and Glenn take care of the lyrics.

How did you get involved with Dog Knights and touring?
9) The singer from Disembarked, who released a 7inch on Dog Knights, mentioned us to Darren who runs the label. And after a few e-mails it was settled. The tour we just did turned out beyond our expectations. We arranged the whole thing by ourselves, and since we're still such a new band it was amazing that people wanted to set-up shows for us and that people actually turned up. Just about a year ago we never thought we would leave our rehearsal room.

Songs like “To Live Is To Be Haunted” and “The Romans Make a Desert and Call it Peace” have both soft and hard passages. Is the shift done or purpose or does it just, sort of, happen.
10) It was on purpose, I wanted them to have some contrast so they wouldn't blend in, which is quite easy when you just pound d-beat and blast beats all the time.

How long does it take TOTEM SKIN, on average, to write a song? Ex. hours/days 11) It depends, sometimes all the pieces fall into place and it takes one hour and sometimes it takes months. Sometimes I feel that some songs were too rushed and could have been done differently. You never are satisfied, but sometimes that helps us a lot to strive for motivations.

What was the most difficult song to write? The easiest?
12) I think "At the Forest’s Edge" was the hardest. We changed so much of its structure before it became what it is today, so that song was really confusing in the beginning. The easiest was probably "To Live is to be Haunted". If I remember correctly that one was written in an hour the day before it was recorded.

The sample in "Seasons Don't Fear the Reaper, We Can Be Like They Are" is awesome. What movie is it from?
13) It’s actually not from a movie but a video game. We’ve used it firstly because it adds tremendously to the atmosphere we were going for, and secondly because it fits the theme of the lyrics pretty much perfectly. We feel like it wouldn’t be the same song without it.

Can you explain the significance or meaning behind some of TOTEM SKIN’s artwork?
14) We wanted the artwork to feel like home. Dark, uninhabitable and with a forest theme.

What are the band members’ favourite songs to play and why?
16) "No Gods, No Masters" - that song is a rager to play live!

How have your hometowns influenced your band?
17) It's probably the reason why there's such a dark theme to the songs. It really stimulates the motivation to write songs. I doubt we would have sounded the same if we came from a more habitable part of the world.

What is the most exciting thing to happen to music as of late?
18) Hardcore music is growing here in Sweden. More show promoters and bands seem to turn up out of nowhere recently. And Dead in the Dirt’s new album is great.

How have you progressed as a musician? Band?
19) I have only been playing guitar for about 4 years now. So I still have much to learn and this band has given me the opportunity to learn so much in such short time. Band-wise I think we learn something new each time we rehearse. If we all of a sudden stopped feeling progress within the band I doubt we would continue playing.

What is the best TOTEM SKIN tour story?
20) Haha most of it's classified. We have only done one tour yet, we mostly play single shows around where we are from. I think we have played like 15 shows or something by now. We usually smash ourselves into pieces and leave the stage or the floor we played on in a bloody mess.

What was the biggest surprise that has come TOTEM SKIN’s way?
21) That some people actually give a shit about us.

Looking back, how do you feel about your older releases?
22) I have mixed feelings about those old songs. Some of them are good. But I think we should have waited a little longer until at least we were a full band to have some more perspective on them. And perhaps recorded them in a decent studio. Even though we rerecorded three of them at the 'Still Waters Run Deep' session.

What are your thoughts regarding mainstream music?
23) It's like fast food. It may taste good at first but there's absolutely no nutrition or whatsoever in it and it leaves you with a bad aftertaste.

Sweden is, in my opinion, the hotbed of aggressive punk/screamo/metal music. Have you noticed the ridiculous amount of talent coming out of your country?
24) Haha, yeah there's a lot of music that's being made within these borders. Perhaps it's something in the water.

Do you have any tips for people trying to start bands - or anything else creative?
25) Don't give up easily, have patience. Take your time and learn to play with your band mates. And most of all, have fun. Fuck what everyone else says.

Can you tell us about Sweden and touring in other countries?
26) There's a huge difference. Generally, people here in Sweden are often quite anti-social. Some seem to have a no-fun attitude at shows, at least when a band that they aren’t too familiar with are playing. That may in part be because shows here are almost always drug free. In places where they allow alcohol, people seem more open to move their bodies to music they don’t know. I really like playing in Germany. There are a lot of people at the shows and a really positive atmosphere overall.

What are your thoughts on the current state of the world?
27) It's shit.

Everyone has phobias, especially irrational ones. Mine? Sharks. Yours?
28) Insects. Can't stand them. It's really an issue for me since I almost get a cardiac arrest every time a bumblebee or any flying thing gets near me.


P.S. Get cats they are awesome. (OMSB concurs!)