TOWER OF SILENCE came out of nowhere and was gone before anyone knew what the hell had happened. Coming together in early 2018, the four members met at a Massa Nera show in Toronto and decided to write an EP before the vocalist moved back to the U.S. (Alex/vox was producing a movie there). They wrote the the songs in three days in March 2018, had it quickly recorded by Vince Soliveri in Hamilton and then mastered by Will Killingsworth. They released it digitally on March 28th, 2018 and had their first/last show on April 14th, 2018 at Sonic Bar & Cafe in Toronto with The Ultimate Screamo Band and Growning Fins. There is footage of the entire set linked here and embedded below. You can read an interview and less abridged version of their formation and whatnot by checking out this Idioteq.com article. I think it's definitely worth pointing out that each member has played in at least one very notable band, including Ghost Spirit, Respire, Polina and Terry Green. 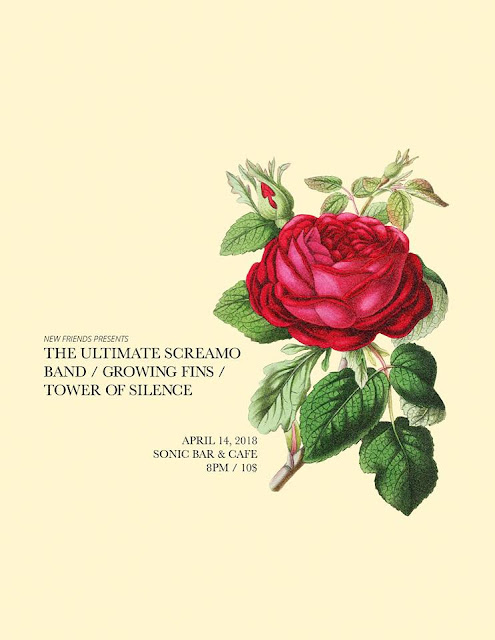 So the 'Tower of Silence' EP is awesome, especially considering how quick it was written and recorded by musicians who had never played in a band together. Opener "October and Her" is a hair over two minutes and makes it apparent from the get-go that the band doesn't sound like any one other band, and instead funnels a myriad of influences and weaves them into a new vessel. A few good genres to throw out there would be post-hardcore, screamo and perhaps even emo-violence with TOWER OF SILENCE coming closest to the sounds created by Foxmoulder, We Watch Clouds and 49 Morphines. The song has a few quick turns, slaps in the face and shoulder-massage moments. "Parade Me Through the City" houses one hell of a riff by Aaron, and it is the vessel for track two to be the EP's standout track. It transitions into some pretty grooves at 27 seconds and then lets loose 10 seconds later with bass-heavy blasts and dark, terrorized screams. "A Long Passage" is a decent song that is brooding in nature and structure, as it nearly equals the length of the first two tracks combined, and culminates at the onset of its final minute with piercing guitars and vocal chord annihilation.

The band is said to be done, but in the same article they didn't rule anything out in the future, citing that, "only time will tell."