I was introduced to Poland's DESZCZ through Tim and his wonderful German label Dingleberry Records. With our most recent trade I picked up a ton of stuff I'd never heard of before, including the 2017 collected 'LP' 12" with a poster, which was the catalyst for my discography trek from the self described vegetarian, neocrust/dark hardcore band. Boasting just a drummer, guitarist and bassist, the three employ dual vocals (one screaming higher one growling lower) alongside biting lyrics to level the listener in one fell swoop. They have released two EPs that are compiled on the 2017 'LP' 12" as well as a new cdLP in early 2018 titled 'III'.

Their 2014 EP begins with the fantastic instrumental intro of "Storm is Coming". At a mere 1:50, this thing picks up momentum quickly and will have you banging your head along before the minute-mark hits. The rest of the songs kind of blend together in a post-hardcore/post-metal with crust kind of way, bringing to mind LVTN, Fall Of Efrafa, Protestant and Nine Eleven. Most tracks fall between about two to four minutes, with track five's "The Grey" being my pick of the best regular songs that include vocals, but most of "Unwanted" comes off sounding like Beneath The Ashes metalcore which is right up my alley, too. I find on this release that they vary in the screaming spectrum much less than future efforts, with the low-end guitarist being a bit higher and the high-end bassist taking his down a bit. The final two tracks were released on the 12"LP version of 'LP' and seem more honed and unique than the preceding EP. Both songs were also given the luxury of having very decent music videos made for them, which I've embedded below. "Through the Malice" is grooving and structured perfectly, culminating in a dense and epic 3:13, while "The Abyss" is a bloated, swelling behemoth that uses more melody with the instrumentals than usual, and it's fantastic. 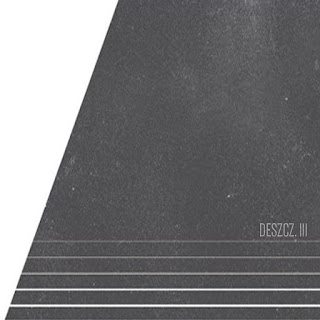 Their newest endeavour, the 'III' LP is a logical step from the two new songs released last year. It opens with "Fall", a brooding eruption of dark, crusty hardcore/post-metal that blazes through a myriad of speeds and sounds, including the full-on stop and faux ending at 1:57. "Black Eyes" follows and is 4:21 of atmospheric and foggy DESZCZ, who have obviously upped their game as this is the second track in a row that kills, and does so in truly epic fashion. "Manifesto" is a shorter track that gather a pretty decent amount of force and expel it at 2:10. My favourite track is "Inflorescence", which surpasses five minutes and is just a beautifully written song with a dreamy, swaying intro, a nice build and then the song goes ballistic with heaps of engaging parts. The band's sole music video for 'III' is for track five's "Standing Alone", and it's a pretty cool video, although I personally enjoy "Black Eyes" and "Inflorescence" much more. When "Moment Lost in Time" starts I generally think I'm listening to Furnace meets black metal and closer "All Shall Bleed" is a straight up banger.

Pretty good stuff, I say. And after all this, to find out that the band donates all of their music donations to the animal rights group Otwarte Klatki is just icing on the cake.