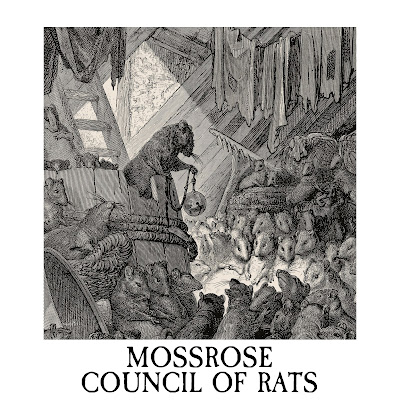 Imagine Thisismenotthinkingofyou playing long, five-plus minutes, epic, dark and screamy hardcore. Incorporate a few different movements (like Angel Eyes, but more focused and shorter), swells of chaos (think June Paik) as well as beautiful, lush, cavernous, ethereal and dreamy sections (yep, Swan Of Tuonela). The latter can be so incredible (truly) that I'm almost tempted to say they should drop the fast bits cuz those slow, ambient sections are to die for. Also, that cover art is sick. If you jammed the 'Moss Ross' two-song EP released earlier this year, know that 'Council of Rats' is much more developed, cohesive and fuckin' mindblowing.

Opener and title track "Council of Rats" gets things off to a great start, with a driving Truman-esque build for nearly two minutes. It then goes ballistic for just over a minute and tapers into a dreamy and atmospheric guitar progression. This flows into an unfuckingreal Welcome The Plague Year and Swan Of Tuonela-esque jammy midsection that erupts soon after in a blaze of dual-vocal glory. I think Guidelines and Ostraca are two other decent comparisons, as the immense and all-encompassing power of this song is balanced by its tranquil and serene sections. Hooooooooly fuck. So good.

"Depressions Shadow Eats Away At The Streets" tears through in typical Shaun Harrison Hancock style aka Thisismenotthinkingofyou until the halfway point and then spends nearly two minutes lulling us into a fantastically woven cocoon of dreamy, atmospheric silk. This is suddenly shredded at 3:40 with lightning drums and awesome, swirling guitar progressions that envelope the final minute and a half. Dear god I'm dying over here.

"Interlude" is just that, a 2:05 break from chaos using piano, guitars and whatever other subtle noise elements that may have been added, for it has such a lush texture. It's almost like Duct Hearts or Godspeed, You! Black Emperor condensed into a two-minute track.

"Cold Reclusive Hands" closes this killer EP off in fitting fashion. At 6:24 it's the longest track here, which begins with rolling and dreamy instrumentals that meet up with distant screams after the first 40 seconds. By 1:12 things take a slight shift but remain in chill form, with the guitars from 1:40 onward being phenomenal and reminding me of some of the stuff Majorel is doing with those mesmerizing, almost-Egyptian sounding guitar tones. The song then transitions to nearly a minute of madness followed by what closely resembles a black-metal section at three minutes, with a subsequent two and a half minutes of pulverizing hardcore that eventually exhausts itself. Hot damn, what a ride.
Posted by Dave Norman at 10:47