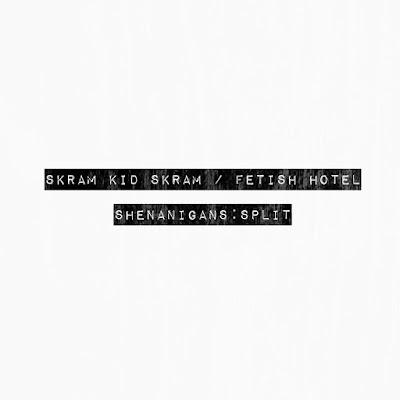 This is an interesting premiere. Patrick McElravy (SKRAM KID SKRAM) has been sending me stuff for a few months, and after their recent submission I decided it was high time to premiere their future stuff. Last week I was given the split between SKRAM KID SKRAM and FETISH HOTEL. Admittedly a tad put off initially by the band name, the quirky solo project from Pennsylvania that is SKRAM KID SKRAM is a violent, swirling jaunt through grind, emo-violence and metalcore sequenced with audio clips. I think apt comparisons would be Secondgradeknifefight, Inside The Beehive and Psyopus. Illinois' FETISH HOTEL is another solo project with a sound not far removed from their split partner, wielding mind-numbing, technical, cyber grind with radioactive vocals and some nice sweeps. Fans of Discordance Axis, Genghis Tron and The Dillinger Escape Plan should take note. The split will be released in full on Thursday, October 12th if I'm not mistaken. Jam dem new tracks below.

FETISH HOTEL - "How Do You Make a Comedian Laugh"
Bandcamp
Facebook
Posted by Dave Norman at 12:56