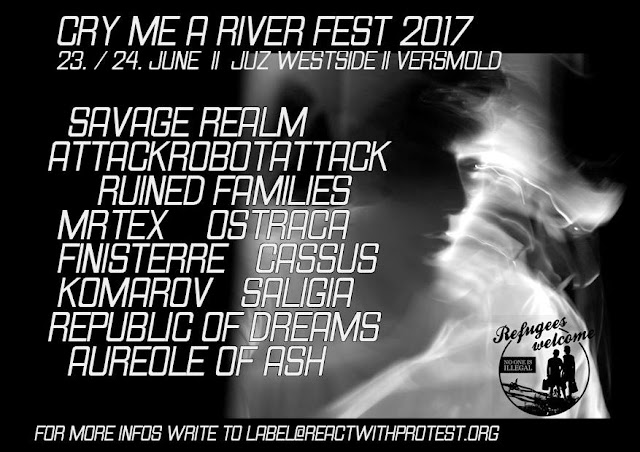 June 22nd/23rd/24th, 2017
Lars and Sabine. Two incredibly awesome people putting on one of the best festivals anywhere. The 18th installment in 2017 was one of which I was able to attend, initially because the project I "do" vocals for was supposed to play, but in the end I was there as a spectator whose jaw was filthy from being dropped on the floor so many times. Below is an exclusive video interview premiere with REPUBLIC OF DREAMS (members of Louise Cyphre, Tristan Tzara and Saligia) followed by every band that played Cry Me A River 2017. Enjoy.

Pre-Show + Day 1
AUREOLE OF ASH
AUREOLE OF ASH is the new band from Lars and Sabine of React With Protest Records, Cry Me A River Fest and Resurrectionists. Super screamy grind/emo-violence that goes full-speed, with no soft/post-hardcore bullshit and plenty of things to say. Bass not needed.
ffo: Tentacles, Cloud Rat and Resurrectionists
links to songs: *1* / *2* / *3* / pre-show videos → *4* / *5* / *6*
Bandcamp
Facebook


Day 1
ATTACKROBOTATTACK
This performance had my interest peaked, with most songs played at this fest recently released on the '7 Songs For the Apocalypse' tape. Check this out if you like driving, temperate screamo with a strong resemblance to both Wolves and Drive Like Jehu, with a bit of Queens Of The Stone Age robot rhythms thrown in for good measure.
ffo: Daniel Striped Tiger, The Rabbit Theory and Wolves
link to song: *2*
Recent EP premiere
Bandcamp
Facebook

Day 1
SALIGIA
It was unreal to see SALIGIA in the flesh. They played pretty much all of the material I'm aware of, including that sick EP 'The New Innocence' released last year. The constant onslaught of crunchy and deep emo-violence employs two vocalists layering throat-wrenching screams. This band is pretty much the reincarnation of Resurrectionists, just without Sabine. One of my favourite sets of the fest, for sure. Sit and enjoy the entire 21 minutes by clicking on the youtube embed below.
ffo: Resurrectionists, Komarov and June Paik
Bandcamp
Facebook

Day 1
FINISTERRE
Playing dark and crusty hardcore punk was FINISTERRE, who finished off the first night with a bang. The sound of the videos is great but the lights were mostly out and it is kind of hard see any specifics, but they are definitely worth a watch.
ffo: Ruined Families, Protestant and Remains Of The Day
link to song: *2*
Blogspot
Facebook

KOMAROV
Opening day two were my friends in KOMAROV who were touring with Ostraca that I had previously met and seen in Zagreb, Croatia (videos/review linked here). They were good in Croatia, but they were fucking lit at CMAR. They spilled the beans and referenced Battle Of Wolf 359 as their primary inspiration and so much fell into place. If you like your screamo blackened, heavy as fuck and with three different vocalists...uhhhh, this.
ffo: Battle Of Wolf 359, Saligia and Ostraca
link to song: *1*
Bandcamp
Facebook

Day 2
SAVAGE REALM
Featuring the vocalist from Battle Of Wolf 359, SAVAGE REALM seemingly blew everyone away at the fest. This shit was heavy. Like, really fucking heavy. Unfortunately the only place I could get a decent view was next to the band and therefore behind the speakers, ultimately losing all of the vocals. I can't wait to hear more recordings cuz this was awesome.
ffo: Battle Of Wolf 359, Rorcal and Perth Express
Bandcamp

Day 2
REPUBLIC OF DREAMS
Probably the band I was most stoked to see was THE ROMANTIC WARRIORS. Wait, not probably - definitely. Their 10-minute set consisted of a few of my favourites as well as four new jams. Despite a patch chord issue the band blasted through their songs and had everyone jaw agape. Goddamn, those beautiful people can shred. An extra cool thing about the full set video posted below is the human wall that we made and which I was a part of at the bottom, all the while filming the set and our wall. In the off chance you didn't see the REPUBLIC OF DREAMS interview above it's linked below as well.
ffo: Louise Cyphre, The Apoplexy Twist Orchestra and Jeromes Dream
Video interview
Bandcamp
Facebook

I've seen OSTRACA a few times now, and this was my favourite performance. Maybe it was the atmosphere. Maybe it was the intensity. Maybe it was that my wife showed up halfway thru the set. But probably it was because Brian (guitar) was passed around like a human canoe during a huge breakdown. We all know and love OSTRACA so I'll skip the introduction, although I will point out that they are releasing a 4-way split 10" called 'Yarrow' later this year and recently did a video interview with OMSB which is linked below their entire set at CMAR. Oooooo baby.
ffo: City Of Caterpillar, Angel Eyes and Gillian Carter
Video interview
Bandcamp
Facebook

The final band of the night was CASSUS. After catching only their final song at the pre-show, I was stoked to see the set in its entirety. Hoooooooolllllly shit I wasn't even ready for it. That wasn't intense, it was hair-raising. It was a spectacle. It was incredibly moving, both physically and mentally. I can't fucking wait for new CASSUS, holy shit. They released 'This Is Dead Art; This Is Dead Time; But We May Still Live Yet' to much acclaim back in 2015. Watch their entire set below, including when the drummer and all of his set gets hoisted up in the air mid-song. It's a sight to see, goddamn.
ffo: Youth Funeral, Daighila and Kaospilot
pre-show video → *1*
Bandcamp
Facebook