'The Next Part is a Blur' 10-song cassette LP 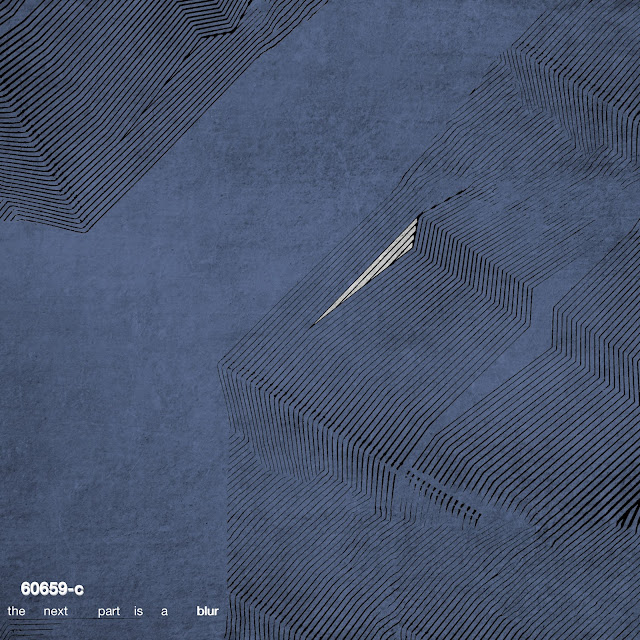 Of the associated acts, 60659-C sounds like a clusterfuck of :
1) Ostraca (the general experience)
2) Caust (the intensity)
3) .gif from god (the craziness)

On 'The Next Part is a Blur' no song surpasses the one-minute mark, and while there is a lot of variation in that short time span, they all share the same twisted DNA. The imposing opener "I Was Awake" is like a precise knife to the ear that has no need to even reach the 30-second mark. "Convenient" is a barrage of stop/start drum patterns and constant guitars that culminate in two insanely short but pulverizing breakdowns with vocalists Gus and Chris dueling it out for most piercing scream. "Crowd" is vaguely similar to the opener in the fact that it doesn't let up and just pummels the listener into submission. "Everybody Out" begins with a false sense of letting up, but quickly blasts into screamy syncopation and chord progressions that evoke a strong connection with me, although I can't put in to words as to why. Maybe it sounds like a screamo national anthem or something. "For Expiring" takes the experimental side of the band further and has them trekking around with a sound that is nearly uplifting, albeit still screamy and epic as fuck. "Hold On, This Hurts" is ambient noise for two thirds of the song and uses the final 15 seconds to take the listener's face off with an explosion of Neil Perry meets Ostraca. "New Sincerity" reminds me of Orchid as well as The Now and is a stellar track, while "The Floor" has some very cool guitar sections, most notably from 9 to 20 seconds, that give it a very unique twist. When listening to "Which Will Never Reach You" it isn't at all surprising that .gif from god members are in this band, as it is one of the fiercest and pulsating songs on here. The album concludes with the longest track, "Dissipates Like a Mirage". After an initial 20-second onslaught the song takes another 20 seconds to chill out and build up to the epic close which, again, has strong ties in sound and general amazingness to their siblings in Caust, .gif from god and Swan Of Tuonela.

If you'd like to order a copy from Zegema Beach, the exclusive of 100 smokey metallic tapes with j-card in a plastic shell comes with a download card and is up for pre-order here. Ships in early October.
Posted by Dave Norman at 12:29