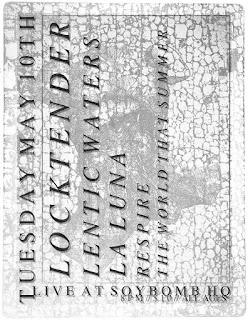 I think Andrew from Locktender said it best that people may look back on this show years from now and say, "Goddamn that's a killer lineup!". I'm happy to say that myself and a plethora of other people were already aware of the amazingness that was about to happen at Soybomb in Toronto on May 10th, 2016. The reason for the show was twofold, as Germany's Lentic Waters were passing through with good friends from the USA Locktender and Toronto's La Luna were having their record release party. Throw in Toronto's Respire and Hamilton's The World That Summer and we are looking at a fucking stupid show.


THE WORLD THAT SUMMER
I was beyond stoked to play this show and my demeanor was probably pretty aligned, as one showgoer told me something along the lines of, "you go crazy and don't care what people think." That sounds about right. We played five songs and broke a string. I thought we played alright but it wasn't our best show. I've included an edited version of "No Hugs for Lucas" below that is pulled from the full set we recorded from behind the drums. This song will appear on the 8-band/4-country 2x12" that will be released later this year. We play again this Saturday May 14th at Doors Pub in Hamilton with Florida's Gillian Carter, Hammerhands, Respire and Space Case (linked here).

RESPIRE
This Toronto band recently dropped the highly and legitimately praised debut LP 'Gravity and Grace' a few weeks back from which they played a few songs. Everyone there was feeling the groove and Emmett's trumpet stole the show. Watchers as well as other bands commented on how fantastic the band sounded and almost everyone I talk to about Respire is beyond excited for the 12"s release later this summer on Zegema Beach Records, Narshardaa Records, Ozona Records and Dingleberry Records. Respire will also be playing on May 14th in Hamilton at Doors Pub with The World That Summer and Gillian Carter. You can watch the shortest song from the LP "Waltz" below.

LA LUNA
This band recently relocated to Toronto and we couldn't be more lucky. They had their new cassette LP with them titled 'Always Already' with three different art options, so I picked up one of each for the ZBR distro (linked here). They played stuff from previous releases, the new release as well as unreleased material and it all slayed. Vanessa seems to be experimenting more with clean, singing vocals and the guitars are becoming very complex and catchy (think Hot Cross!). I managed to record a brand new song which you can check out below. I gotta say again how amazing it is that La Luna now lives in Toronto because we love them. Watch another two more songs from the show right here and here.

LENTIC WATERS
Holy fuck. Hoooooooooooly fuuuuuuuuuuck. I knew they were going to be good, but even Andrew was downplaying them when telling me that they "tear it up". These very friendly Germans played their new LP 'The Path' in (nearly) its entirety and I couldn't stop moving. The sound from the speakers was huge and the band sounded as good or better than their recording. The mixture of hardcore, thrash and screamo is so fluid that fitting them into any genre seems like a big waste of time. The new vocalist Daniel kills it on vocals, Mike on bass and vox sounded fantastic, Julius on guitar was dancing around and Jojo on drums was mesmerizing. If you haven't picked up the new record I'd recommend grabbing one as the band has had to buy copies from the labels for tour because they are selling out so the labels' numbers are dwindling faster than usual. I linked the 12" in the ZBR store below. Be sure to watch their entire set which I've linked in two parts here and here.

LOCKTENDER
For the third time in three years I witnessed Locktender lay waste to Soybomb. This time was extra special because out of four songs three of them were new. The new stuff takes the soft and hard approach to the extreme with insanely heavy parts preceded by ebbing melodic passages, sometimes with three members exchanging clean vocals simultaneously. Wait, lots of singing in Locktender? Yep, and it works really well. When these songs arrive at the aggressive edge it's like a blitzkrieg explosion of sheer power and ferocity, as can be witnessed in the video posted below for one of their new cuts. The new LP will likely be recorded in late 2015/early 2016 and all the songs never surpass the 7-minute mark, which is very new for a band who's last release housed an 18-minute and 12-minute song. It should also be noted that Andrew (guitar/back-up vox) underwent heart surgery but three months ago and was in full force at the show, which was beautiful to see. Easily one of the most powerful live bands around. Watch another new song from the show right here.