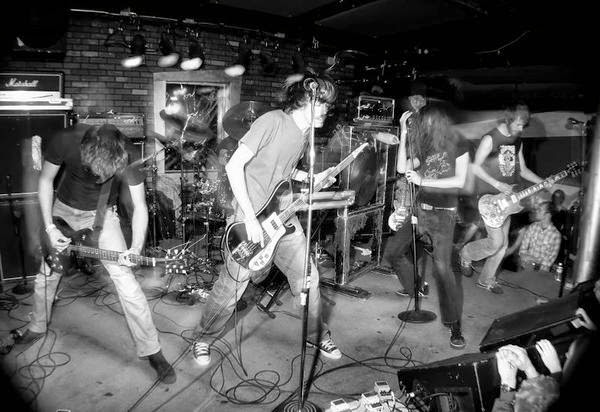 BURIED INSIDE are one of the most important Canadian...no wait, international heavy band of the 2000s. They released 3 full lengths during those 10 of their 13 year-career with all of those albums being absolutely phenomenal in it's/their own right.

'In And Of The Self' tends to get very black metal and speed-thrash. They also combine lots of early This Day Forward, Codeseven ('Division Of Labor'-era) with Converge. Like the vast majority of great bands, they had their growing pains through an early record that had direction, but an overload of it. There's even a bit o' cheese, although it is minimal. There's seems to be a lot of German-crust/hardcore/powerviolence on here as well. I waited for years for this bad boy to pop up on Ebay so when it finally did I dropped over $60 for it. Oops.
Best tracks: eh...

'Suspect Symmetry' is BURIED INSIDE's first fantastic album in a strung of such albums, and this is the band's 'Swords Against The Father', if you will. It's crazy fast and technical. It holds without question some of the sweetest riffs I'll ever hear. All of the players help out in every song. They really include all the instruments equally and effectively. "The Fallacy Of Wildlife Conservation" is a fist-to-face song that is destroys the listener from the get-go. If at first it's too hard for you, just wait until the 2-minute mark when the song slows down to a beautifully constructed crawl. The eerie, twirling bass riff sends the track back into breakdown mayhem, but with a long overall rhythm that is very easy to find yourself rocking back and forth. "Kroc Of Shit" is fucking stellar. Holy shit I love this song. It's easily the best song on this album and encapsulates all that makes this record amazing. The opening bursts the door in before slowing down to a massive and catchy-as-all-hell breakdown from 0:14-0:48. The drums at 0:16-pretty much the end of the song are immaculate.
Best tracks: "Racking The Skulls Of Golgatha", "Clockwork (Birth of the Chronophile)", "The Fallacy Of Wildlife Conservation", "Kroc Of Shit" and "Terrortourismology".

'Chronoclast' is heralded by most who follow the band's legacy as their crowning achievement, although it probably equals 'Suspect Symmetry' in my...ears. This is an altered beast. Gone are the lightning-fast songs. In their place sludgy/doomy/post-hardcore/death-metal and dare I even say hints of metallic screamo. "Time As Surrogate Religion" is probably my favourite, with that big juicy bass blast near the end of the song. Oops, I sit corrected. "Time As Imperialism" is the best song on the album due to the epic, slow, web-like nature of the song. Again perpetuated by a very Tool-esque bass riff, it ebbs and flows until culminating in an orgiastic climax that showcases multiple vocalists and has an awesome Envy-ish riff that is really at the forefront of the track. I should also mention that the lyrics are primarily based off of Timothy Rifkin's "Time Wars" book. I borrowed it from my bro and he says it will change the way you look at the world. I'm excited to start it after all these baby books.
Best tracks: "Time as Ideology", "Time as Surrogate Religion", "Time as Imperialism", "Time as Abjection", "Time as Commodity" and "Time as Resistance".

'Spoils Of Failure' was the band's final venture. This is a massive release that constantly pummels the listener with post-metal, post-hardcore and post-rock perfection. Songs such as "I" never let up for the entire duration of the song and are generally led by a thunderous bass riff enveloped by 2 deep guitars, crashing drums and some of the harshest/deepest vocals the band has had on any album. For the most part this formula of new, heavy and slower BURIED INSIDE is constant with a few exceptions. "II" could have been culled from the 'Chronoclast' sessions, being of the shorter variety and a bit faster with the screamier vocals.  "III" is a post 10-minute romp that combines both styles and the rest of the album follows suit, for the most part, balancing amazingness with awesomeness, and they do it flawlessly. If anything, hit up "V", as it's essentially the title-track and the last half of the song may equal the sheer perfection of "Time As Imperialism", as the dual vocals, amazing lyrics and guitar solo will make your goddamn day.
Best tracks: "I", "II", "III", "IV", "V" and "VIII".

I've heard some people posit that the band recycles some riffs and the songs can sound identical. Identical is a bit of a stretch, but I'd have to agree that the band does have a distinct style that sometimes sounds like I've heard it on earlier albums. They do like their themes, though. Considering how downright amazing the band was, I don't give two shits about this argument and for the most part it's a moot point.

Download their complete discography and learn a thing or two from these legendary Canucks.

Chronoclast Medley from the band's final show in 2010.

(2001) BURIED INSIDE - "The Fallacy of Wildlife Conservation" (from 'Suspect Symmetry')