BACK WHEN + ***INIT RECORDS interview***

Band: BACK WHEN
Genres: Punk / Sludge / Doom / Post-Hardcore / Post-Metal / Screamo / Noise / Experimental / Math-Metal / Emo-Violence / Thrash
Related artists: Examination Of The..., Eyes Of Verotika and Hercules.
Country: Omaha, Nebraska USA
Years Active: 2002-2008
Songs: "Exodus. Phobos. Exodus. Deimos" and "We Giveth And We Taketh"
Albums: "Swords Against The Father" and "We Sang As Ghosts"
Years: 2004 and 2005
Label(s): Init Records / Imagine It Records / Shock Value Records /
This post's artist is from the May 2014 Mix. This is track #1 and #32.
You can download the May 2014 Mix#5 right here or get the new June Mix#6 here.
For fans of: Buried Inside, Joshua Fit For Battle, Rats Into Robots, Converge, Castle, Altar Of Complaints, Amenra, Envy, A Day In Black And White, Seventeen Again, Kaospilot, Neurosis, Enkephalin, Milanku, Examination Of The..., Loma Prieta, Bucket Full Of Teeth, Isis, Jeromes Dream, Craneo, Llynch, Circles Over Sidelights, Loftus, Takaru, The Now, Amber, Titan, Angel Eyes, Endamori, Litany For The Whale, Knut, Me And Him Call It Us, Cave In, The Setup, This Ship Will Sink, Totem Skin, Harlots, So Hideous My Love, Tusk, The Abandoned Hearts Club, Cassilis, Dolcim, Swan Of Tuonela, Ed Gein, Majority Rule, Ruptures, Shoto, Thumbscrew and Graf Orlock aka PROPER Screamo.

Okay people, this is it. I started this blog the the sole intention (not really) of sharing THIS band with you. What is this band? BACK fucking WHEN. Do you know BACK WHEN? Chances are, hell no. I have had only 2 instances in my entire life when I have seen the band referenced. Just 2. Once when my boy Bobby from The Ghost Is Clear Records posted a pic of that sweet, sweet double LP and once when Brian Chamblee mentioned that he had their split with The Setup. That's it. Everyone else has no fucking clue what I'm talking about. The times-are-a-changing if I have anything to do with it.

BACK WHEN was formed in 2002 from the ashes of several bands, most notably the much underappreciated mid-western screamo act Eyes Of Verotika. The band was built around Jonathan Tverdik and Aaron Broveak, two ridiculously talented individuals. I may be incorrect, but I think the band shared members with Examination Of The... - can someone verify this?

Their first proper record was the EP 'Celebration of Alceste' which is only mediocre. Much like Buried Inside's 'In And Of The Self'' album, it is unmistakeably BACK WHEN but they had not found their footing and seem to wander about aimlessly, as technically proficient as they may be. Think of a less thought-out Converge meets Dispensing Of False Halos and you've got the right idea. Some math-metal enthusiasts may end up liking this album more than the BACK WHEN full length album. The most noticeable difference here are the vocals, as the lower end screaming borders on Joshua Fit For Battle growling, although JFFB blows this particular release out of the water. My personal favourite is "Mandatory Exodus To Hell", which has a serious Jeromes Dream meets Converge and Graf Orlock thing going on.

Next was 'Swords Against The Father' 7" EP. No joke, the best EP of all-time, as this beats out Hot Cross and Hopesfall in my book. Seriously this record is perfect in every single way. Imagine Converge technicality meets Jeromes Dream influences and mashed together with the heaviness of Buried Inside and you're pretty much on par with what this sounds like. I had no idea something so fast, technical and heavy could be laden with so much melody. I can't even pick a favourite track, as all 4 are absolutely stellar, but I can quickly describe them:

"Exodus. Phobos. Exodus. Deimos" is probably the quintessential BACK WHEN song. It's insanely fast, mathematical and massive. The entire thing is over in less than 3 minutes are will leave your head spinning. "Examining The Lives Of The After" is more of a post-hardcore romp through some heavy metal riffing and solos. It also contains some unbelievable drums. "A Hero's Welcome" starts out with the obvious direction the band will move to with future recordings, mainly a lot more spacey guitars and the speed has been slowed down a bit to allow for the epic builds that are a hallmark of 'We Sang As Ghosts'. The song does boast some insane fast parts and is one hell of a romp through speedy/screamy mathcore and even has some megaphone/Jeromes Dream-styled vocals. "Sons Against The Father" is the slowest of the 4 songs and is less than 2 minutes but still packs a wallop. It's another spacier song that swirls around the listener with some killer drums and vocals before hitting some soft noodley notes that carry out the jammin' outro. Again - Best. EP. Ever.

In 2005 the band finally dropped a proper full-length album, entitled 'We Sang As Ghosts'. The songs on this album all fit together like a large puzzle as the band opted for a much slower and methodical approach to songwriting. The entire record is stripped of speed for speed's sake, excessive technicality and multiple vocals. This is a rather straightforward affair and they fucking nail it. This pales in comparison to the 'Swords Against The Father' release solely due to its lack of variety and the fact that other bands have done this style before, while the extremely technical older, material was closer to being innovative and fresh. This LP is more of a tried-and-tested formula, but again they've shaved off almost all unnecessary fat and trimmed it down, albeit the long song lengths (all tracks hover around the 7-8 minute mark with some surpassing 10 minutes). The illest tracks on this double LP is the opener "We Giveth And We Taketh". It's 8 minutes of ambient/crushing post-hardcore and post-metal with obvious nods to Neurosis, Isis and Buried Inside's slower material. There's a stunning clean-singing section halfway through the song that builds to an epic climax just after the 5-minute mark and touches on most styles encapsulated on the release. "Soothsayer" is like listening to a battle in a fantasy world. Maybe Peter Jackson should be acquiring these guys' services for the next Hobbit piece of garbage to make those chase and fight scenes hook the audience like never before. Maybe not. Regardless the eerie noises and driving nature of the song is just plain epic and perhaps the most accessible song on the album. "Pelle Versando" is a huge 10 minute song that plucks a few country-tinged chords, but mainly is a vast post-metal and doom wasteland that will have you bobbing your head along during the thick breakdowns. "Ghost" is another example of BACK WHEN stretching their collective boundaries. The track starts with more haunting and subtle soft bits that eventually culminate into the song's primary riff that the band toys with, giving slight variations that really flesh-out the track. Love them hard vocals, too. "Beloved" is the final track and clocks in past at the 12-minute mark. It's a fitting closer and follows pretty much the same loose structure as the previous songs, alternating between bass-driven soft jams and crushing post-everything.

I should also note about the absolutely stunning packaging the 2x12"LP has. It's a gatefold sleeve with some bold art and 2 different coloured swirl vinyls. If you ever come across this masterpiece it's worth at least $100 in my mind. Check it below. 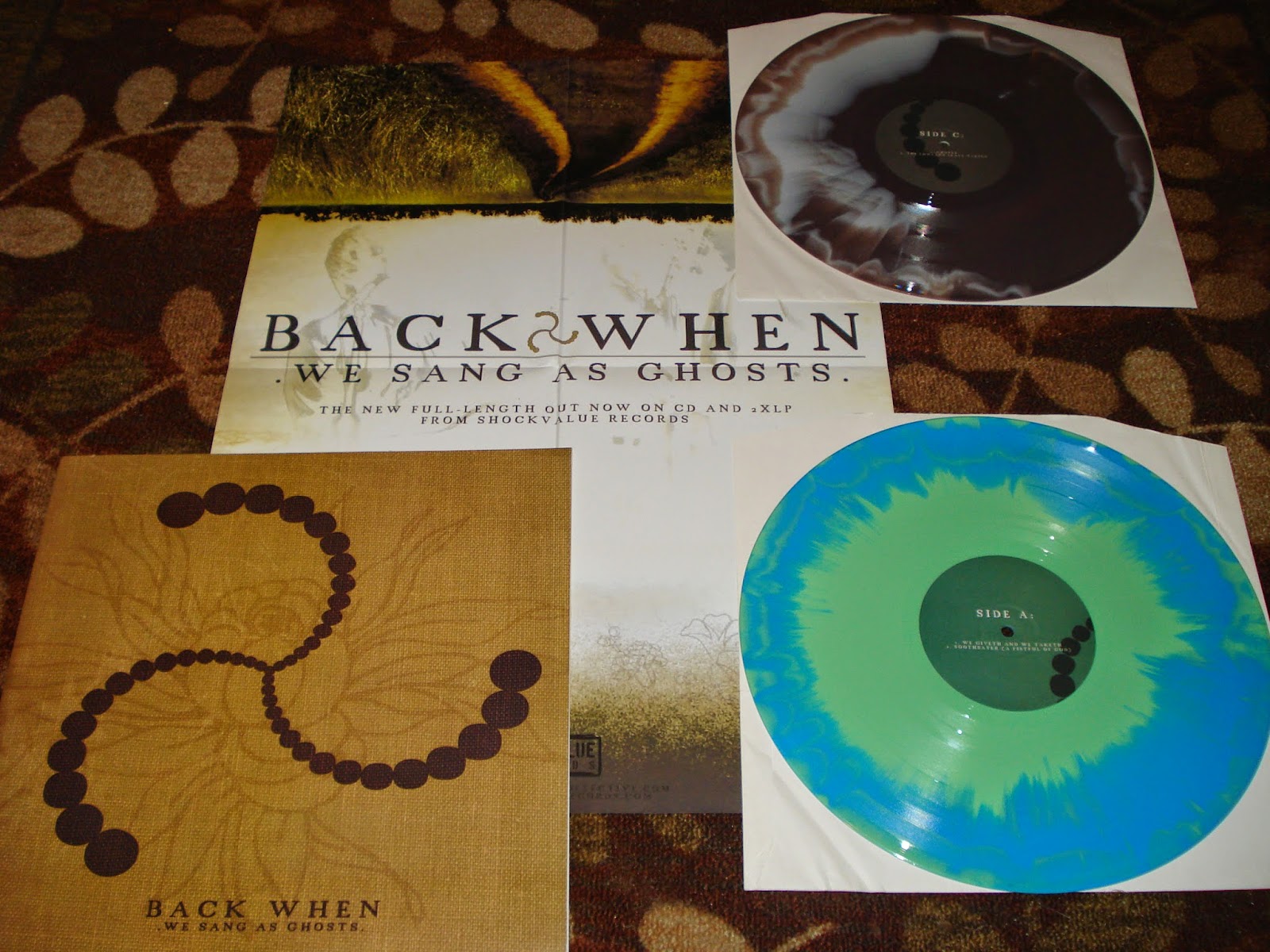 With what I will assume is a b-side from the 'We Sang As Ghosts' session or possibly the other song the band recorded when demo-ing said album, "Fraud Of Scribes" is the perfect bridge material to connect the 7" and the LP. The song boasts extremely sludgy palm-muted guitars in constant breakdown fashion coupled with a spacey/swirling solo that works with the vocals to provide a splash of colour in an otherwise dreary and dark song. I should mention how engaging the vocals are in all releases by the band. They vary between low yells (without ever becoming growls) and higher-pitched screams (without ever becoming shrieks) and are one of the band's defining features. This band, along with Seventeen Again, are the 2 bands I try to emulate most when doing vocals because the monotonous stuff can get very old very quickly.

2006 saw the demise of BACK WHEN, but they released a sick cd compilation named 'In Presence' with all of their out-of-print material at the time (all releases are now oop, I believe) that includes the 7", Setup split, a demo of "We Giveth And We Taketh", a new song (meh) and an amazing Jeromes Dream cover. That's right, a Jeromes Dream cover recorded almost 10 years ago! I see people flailing wildly in an attempt to cover and write songs like Jeromes Dream, but BACK WHEN was doing that shit before most bands had graduated from elementary school. Not only that, but the cover is very accurate whilst still sprinkling a dash of BACK WHEN's style throughout the track.

For a brief, shining moment BACK WHEN got back together and recorded some kind of video demo, only to quickly disband into obscurity once released. I've searched the internet and haven't found that video in a few years, so perhaps it's gone forever. From my recollection it was much more influenced by southern rock and had an epic Bleeding Kansas-feel to it and haunting, clean gang vocals. Alas, it doesn't matter because the album was never recorded.

Steve, the man behind Init Records talked about his label which was instrumental in bringing BACK WHEN releases to rabid fans like myself. Please read his interview in full, here.

I'll reiterate once more, the 'Swords Against The Father' EP is the greatest EP of all time and BACK WHEN is a band that you need to have in your library. Remember that this stuff was recorded a decade ago and still topples pretty much any band that releases material in this style. I would go as far as saying they dwarf the competition. But, this wasn't a competition. Fuck, just download the discography and blast it. You're welcome.

2006 - In The Presence compilation cdLP (collects Swords Against The Father 7", The Setup split and others)