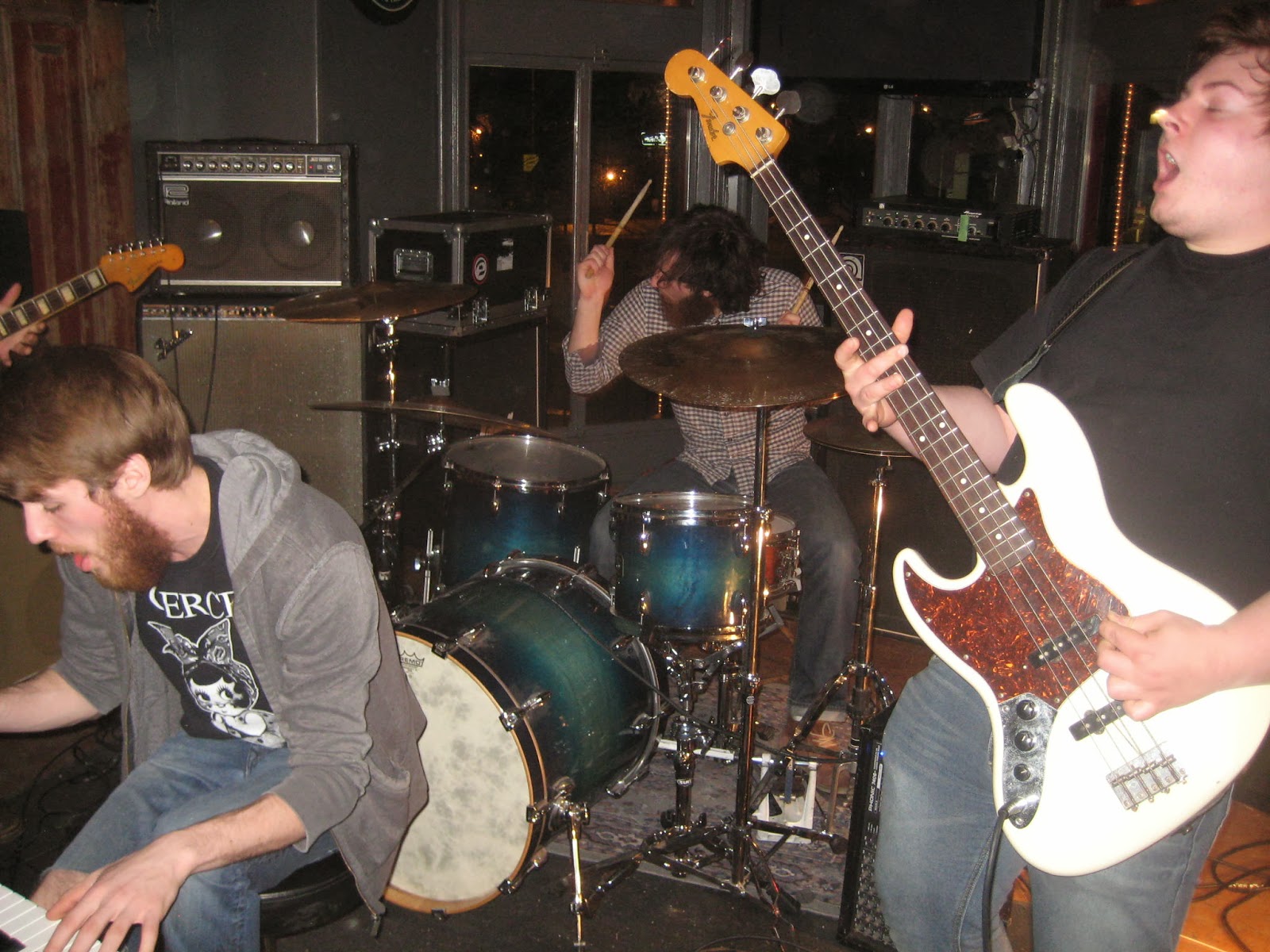 I only heard about this show about 2 weeks before it happened. I wasn't able to get anyone in Hamilton, besides myself, to attend the show. So there were about 25 people watching 3 bands play, and about 15 of those people were in bands. For shame, Hamilton. For shame. At least Door's Pub, the location, was a fantastic venue and everyone was super accommodating and nice. Big shout outs are in order to Graham and Caleb for bringing in great bands and letting me bring my distro crate. Gotta give the love first. Now, on to the review...


*WATCH FOR WOLVES*
WATCH FOR WOLVES started the night and were the only band I had really delved into regarding their music before attending the concert, so I'll list their live song titles, but won't for the last 2 bands below. Read the review I wrote here, as it pretty much explains their sound. To quickly summarize, this band from Montreal has only been together for about a year, but their debut EP 'Count It All In Joy' is already grasping successfully at emulating State Faults and The Sky Above And Earth Below while incorporating their own spin on it, aka passionate and melodic screamo with the occasional clean vocals. Grab their EP from the the bandcamp page or grab the physical copy of the cd in the Zegema Beach Records shop here.
*Bandcamp

"I Hope They're Right"

*BLACK LOVE*
Next up was BLACK LOVE (also from Montreal) which is a very different kind of band and almost defies description. I don't really even know who to compare them to. The vocals are excellent, alternating between shrill yelling/screaming (Comadre, perhaps?) and almost Death By Stereo/Cursive/Bear vs. Shark-sounding melodic singing. The instrumentals are really cool and mash together numerous styles, including bands such as Russian Circles, Envy, Mono, Secret Smoker and These Arms Are Snakes with a heavy emphasis on melodies and twinkly parts. Check out the first song posted below for sure as it blew me away, although I did not film the first song they played live and it was fucking stellar. I cannot wait for their upcoming release that they will be recording soon!
*Bandcamp

*NEW WINGS*
To close the night NEW WINGS crooned through 4 songs (3 of which are embedded below) which really brought the room together. NEW WINGS shares members with Congratulations who are in turn associated with Life In Vacuum. This Ontario scene is getting pretty ridic. These guys played a peculiar but obviously effective set that consisted of a drummer, bassist, guitarist and keyboardist. The band leads with the keyboard as the atmospheric haze created by the rest of the band reminds me of later era Elliot. This doesn't always hold true, though, as they tend to move methodically from slow ambiance to fast, almost Hella-meets-Godspeed You! Black Emperor instrumental fuzz-rock. I don't believe the band has any physical releases left but they are currently in the studio tracking! Grab their stuff from the link below.
*Bandcamp

So yeah, good fucking concert. Get on the ball next time, Hammy.
Posted by Dave Norman at 16:19