I think I heard about YOO DOO RIGHT before they ever actually existed. I remember talking to Justin of (then) Congratulations about his imminent move to Québec back in 2014 or so and he mentioned that he was planning on starting a band with Charles, the bassist of Black Love. Well that obviously happened and they rounded out the lineup with In The Name Of Havoc's John on drums and Charles Bourassa on synth/electronics.

When they released their first EP 'nobody panicked & everybody got on', Charles hit me up right away and I began jamming YOO DOO RIGHT. I like the dense and lush atmospherics of the synths and guitars with the catchy-ass bass riffs and almost tribal-like drumming. Opener and 7+ minute title track "nobody panicked & everybody got on" is my personal favourite, as well as my son's, who loves to sing, "blue, gray, navy blue!". I, on the other hand, can't get enough of Charles' bass on this track, especially when he climbs up the neck and busts out those groovy fucking five notes that resets the instrumental cycle. "distaval" is ethereal and womb-like, birthing a serene, three-minute, ambient-noise track, while the first half of "Fear of Elevators" is awkward and disturbing noise that shifts to acid-rock and tops five and a half minutes. Original closer "the ocelot that lost a lot" somehow manages to mix whirring and mechanical noises with pulsating and dirty space rock.

In April of 2017 I stumbled across the fact that YOO DOO RIGHT was playing in Hamilton, where I was residing at the time. I got on my bicycle and got out to the house show to see them mesmerize about 20-25 people in that living room, and even captured a few songs which I've linked below.

In June of 2017 the band released 'EP2', a much different album that retains the core YOO DOO RIGHT but shows the band taking a noticeable shift in direction. The EP opens with "Whilst You Save Your Skins" makes this apparent, with a much faster, dancier and confident instrumental rock. The excellent production quality really makes the song stand out more than the previous offering. "Marche des Squelettes", the bonus track from their debut 2016 EP, has been rerecorded with vocals and is much more in line with their new approach to songwriting which seems to be influenced by the latin, post-punk, prog-rock of The Mars Volta and Atsuko Chiba. The second part of the release begins here, as the final three songs are titled "Apatride (Part 1)", "Apatride (Part 2)" and "Apatride (Part 3)". The first is an eerie ambient track that ends in destruction, the second if very frantic and has drums that are just bonkers leaving the third to dabble in a ridiculous amount of genres that sometimes border on surf and carnival music.

From March 31st to May 9th YOO DOO RIGHT will be supporting Acid Mothers Temple on tour throughout the U.S.A. and Canada. Goddamn, that's huge! 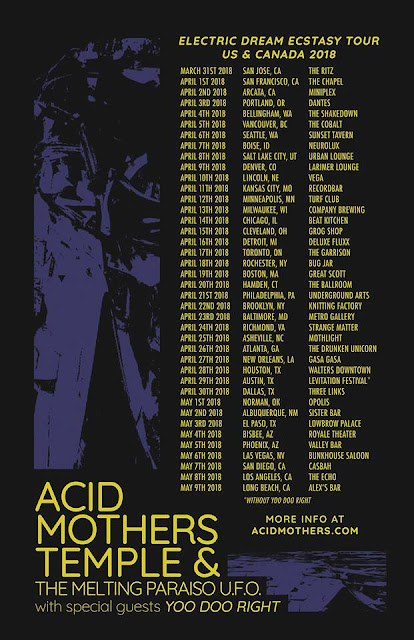