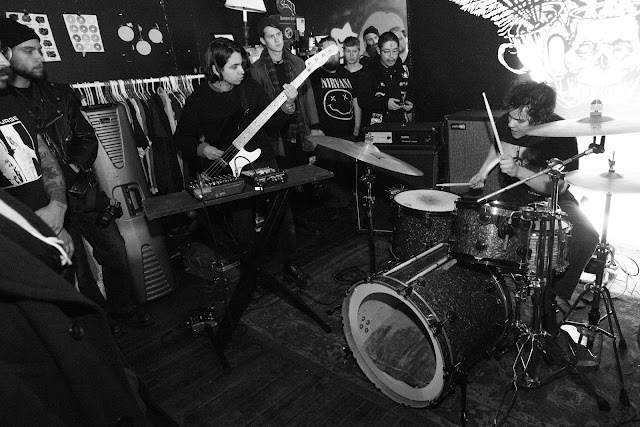 Lucas: Hey y’all! so you’ve ﬁnished your headlining set here at D-Beatstro in Toronto, needless to say it was amazing. I was standing 3 ft away from you [James] and your drumming style is incredibly raw and precise. I was wondering where you got your drumming inﬂuence from?
James: A lot of places I suppose. I mean, drummers I really like in that style would be like Casey Hansen (ex-Gaza, Cult Leader), Tyler from Yaujta. Randomly enough, The Mars Volta is one of my favourite bands, so I take a lot from that.

Lucas: Given that it is your ﬁrst time across the northern border; what you think of shows in Canada so far?
James: Oh they’ve been amazing, maybe even some of the best ones of the tour.

Lucas: Coming to Canada, and knowing about our scenes strictly through a social media perspective, how do you think it fares when you’re here playing to the same kids online? And what was your impression of Canadian Screamo/Hardcore in general before this?
James: Well I’ve been contemplating this a lot actually. For example, if you post a show on social media in Austin, you’ll have a ton of people that are supposedly going to show up but don't; and I ﬁnd that here, every show was fucking ﬁlled with people, and they were down even if some of them have never heard of us.

Lucas: How were the shows in New York with Majority Rule and pg.99? How did it feel to get the oﬀer?
James: Haha probably the biggest trip of all time! Me and Matt [King] drove from Austin to New York like a non-stop 30 hour drive, the other guys ﬂew out. Yeah, went and played some shows with our favourite bands, for example Matt’s favourite band is Majority Rule. We’ve always really loved them, it was mind blowing.

Lucas: Your S/T demo has received so much praise and attention and interest, even with the second pressing being put out through Deathwish inc., I just want to know, did you expect any of that after putting out a three song demo?
James: No, not at all. So the band started about 8 months ago, the songs were actually just songs for a side project (we were in another band), and we all really enjoyed the intensity we were able to convey through this side project. Eventually the main band went on hiatus and sort of split up, so this took over [Portrayal of Guilt] and has randomly taken oﬀ haha! 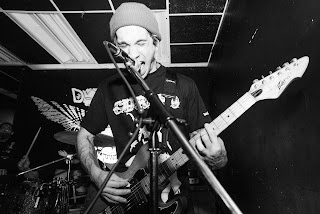 Lucas: With all the diﬀerent labels looking at you guys attributed with speciﬁc sounds, and the fact that your demo is so incredibly dynamic and well composed, you cannot really pigeonhole it into one speciﬁc genre. Do you guys get bothered at all when people refer your music as a speciﬁc type of music. Because you now have a crossover of fans that love screamo/crust/powerviolence etc.
James: Exactly, that’s almost what were going for. When we ﬁrst put it out, the Miss the Stars label were the ﬁrst people to hear our music. Their label is more indicative for screamo releases, and we love that music, but we also love tons of other music. I think people pick up on that, not just screamo kids.
Lucas: So, tonight you had your bass player [Rick] using the electronic mixing pad as well. It seems like between songs, you guys got a little more industrial sounding, are we going to hear more of that in the future?
James: Musically, we have yet to incorporate it. It’s more a live tool, we feel like it helps the live show.

Lucas: I just wanted asked about the limited Christian Death run, and how that come about?
James: We’ve been talking about doing that cover for awhile now. We were in Arizona on an oﬀ-day, and our friend hooked it up with a spot to go record it, and got it all done that same day.
Lucas: Now, conceptually and lyrically; misanthropy and depression are common topics, does the current political climate in the States; not only aﬀect you as people but also in your writing?
James: It deﬁnitely does, it’s a confusing time for everyone. If you want to talk Matt about it, here he comes actually haha.

Lucas: Hey Matt, so as I mentioned to James, the political climate in the States is a mess at the moment. I’m just wondering if and how it plays a part in your writing?
Matt: I don’t know really, it just makes me angry I guess. Ever since I’ve been writing in general it’s always been sort of creepy, darker stuﬀ, including music.

Lucas: What are some of the bands that inﬂuenced you and how did you originally get into more aggressive and emotional music?
Matt: Well, Majority Rule is my favourite band. When I started listening to music, someone gave me a hard drive full of Majority Rule, pg.99, Mass Movement of the Moth, Hot Cross among plenty of other bands. So I guess you could say the ﬁrst music that I really got into was screamo.

Lucas: I was talking to James earlier about people labelling you guys diﬀerent sounds and genres, and how you might feel about that?
Matt: I mean, that’s kinda the idea though. I wouldn’t want to be pigeonholed into any sort of genre. I want to be able to play everything.

Lucas: Coming from Texas, I just wanted to know what your impression of the Canadian screamo scene is so far?
Matt: I talked to the people in Respire, we didn’t really know what to expect to be honest. It seems like people here are more into the genre.

Lucas: Lastly, what advice do you have for up and coming punks, whether they want to start a band or just be part of the community?
Matt: I would just say, do whatever you want, be yourself, don’t let anyone inﬂuence you on how to be yourself.

Lucas: Awesome! Thank you so much for your time, and that show was incredible!
Matt & James: Yeah thanks so much! 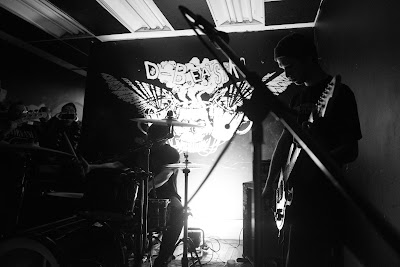