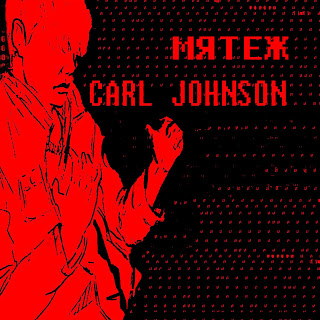 I got a facebook message a few months back (late 2017) from a Russian band called CARL JOHNSON. I'd never heard of them, and they asked if the project I do vocals for (мятеж) wanted to do a split tape. After checking out their 'split w/YCПЕХ!' I agreed and was pretty excited. Soon afterwards I received their tracks for the 'мятеж split' and I was blown away. Their dirty, vicious and doomy style of screamy hardcore/emo-violence has been honed and I'm super stoked to be on a split with such awesome songs.

The band started in 2016 in Ryazan and in that first year they released a live demo EP awkwardly titled '#1 (HQ remastering)' which has six tracks, all of which ended up on the 2017 LP. The sound is unmistakably there as the songs surge forward in a chaotic and screamy spiral, but the live recording quality obviously leaves much to be desired, which was soon rectified on the proper version of '#1'. They also released a digital single called "the end is near", an instrumental affair with an audio clip at the end.

It was in 2017 that CARL JOHNSON found their sound, fitting somewhere between the dark, chaotic madness of Germany's Carol, America's Owen Hart (aka Earth Control), Malaysia's Daighila and newer bands such as Under A Sky So Blue, Hive Mind and Saligia. First releasing their 10-song LP '#1' in May, it's fucking devastating, no doubt about it. The "Intro" and "Carl Johnson" tracks begin with ambiance, until about 35 seconds into the band's self titled song when the instrumentals kick in and play around for another minute. It isn't really until track three that the vocals meet up with everything else, which happens on the 54-second "Dystonia" that blazes through and includes a full-scale demolition at around 37 seconds. "Freak" has a screamo-as-fuck opening guitar riff that quickly morphs into devastating emo-violence and is probably my favourite on the LP, reminding me of Crestfallen. "Lovers" is another noteworthy song that builds to utter annihilation, as does the very short but extremely powerful "Lowrider". CARL JOHNSON's next release was the split tape with YCПЕХ!, housing three tracks of violent, demonic screamo. This album is the first to showcase the alternating shrieky/growly combo that is spread across the band's future material and is debuted on "Ice Cold Killa".

On the new 2018 'мятеж split' (that we are premiering here today!!!) CARL JOHNSON offer up five of their heaviest and best songs to date. The B side of the split opens with "Second Wind", a brutal and vicious 1:45 chaotic, shrieky, growly and grindy powerviolence that is devilishly good. One of my favourites is next, the stellar "Against You!". This thing opens with a brooding, Orchid-style guitar that crashes into everything else at the 30-second mark, creating a swelling, grooving, blackened screamo jam, not unlike Under A Sky So Blue. The middle of the song leans more towards hardcore punk with the ending being sludgy, prodigious, breakdown-laden metallic hardcore. "Pull the Trigger" has some seriously extreme vocals in both the high and low department, "Enemy/Self" begins with some of the most insane emo-violence (think Shikari) forty seconds only to give way to soft, chill screamo ala Raein, while closer "Hot Killa" is 24 seconds of madness and a fitting end to an awesome EP. It will be released on 50 copies, with copies going to the Zegema Beach, Polar Summer and the band.