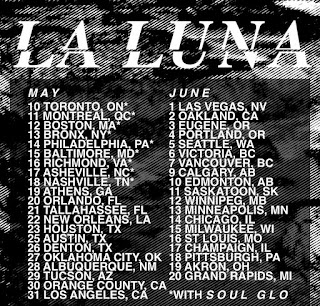 I pretty much knew going in that this was likely the last time I was going to see La Luna...which just made this entire experience surreal. By the time they get back from tour I'll be on tour and then I pretty much move to New Zealand. I guess this is a bit of a thank you to the band via expedited show review to help with their 40 dates from now until June 20th. Due to putting my son to bed and having to work the next morning, I missed the first band Chris (featuring members of La Luna, Animal Faces, Fond and Creeper) but were told their first live set was very good and sounded like very chill and dreamy post-rock. I also had to jet before Growing Fins even set up but was told on the ride home by my friend Luther that I would likely be a fan of the lively and screamy emo band not unlike I Love Your Lifestyle. The middle three bands are reviewed below the La Luna + Soul Glo video I made.


NARRA
Coming in with Soul Glo from Philly, this five-piece had an interesting dichotomy of soothing and jammy post-hardcore that switches in and out of screamy and abrasive punk, generally on a song-to-song basis. I only got a video of one song and I don't really think it does the band justice, although there is an awesome part at 25 seconds where the drummer does a cathartic 30-second solo while screaming like a caveman. Awesome.

SOUL GLO
Holy fuck. Ho. Lee. Fuck. That was crazy. I took a video of the Philadelphia quartet's full 18-minute set. Shit was ballistic. I didn't know GG from Weather Lore is in this band so I was super stoked to see him again. Not all that unlike GG's other band, SOUL GLO is the sound of a riot, plain and simple. It's dirty, caustic, loud, abrasive, real, angry, honest and passionate hardcore music. Prepare for a pummeling with this video as well as their next 8 dates with La Luna!

LA LUNA
Kicking ass as always, LA LUNA's rebirth in Toronto has been beautiful to watch and I wish them nothing but the best on their 40-day tour. You'd be fucking stupid not to go see them in your town barring prior engagements, and are also playing most of their dates with amazing bands, such as Soul Glo and Truman. They recently released 'Always Already' on vinyl earlier this year, have a ton of sweet merch and are playing a few new and unrecorded songs on tour so you'll be in for a treat. They are also super chill so you can likely go talk to them. If you see the bassist Alex just tell him that "Botch rules" and you've got a juicy 10-minute conversation on your hands. Have an amazing tour, my friends, and enjoy those cds!