MALEVICH sent me their debut LP in late 2016 and it wasn't until early 2017 that I really got around to listening to it. It's good. It's really fucking good. It's super abrasive metalcore with some of the rawest, fiercest and varied screaming I've heard in some time. They hail from Georgia, which is where Under A Sky So Blue are from. The two bands share a similar sound (and a vocalist!), although MALEVICH ditch most screamo/emo-violence connotations and fall more or less directly into the metalcore category. 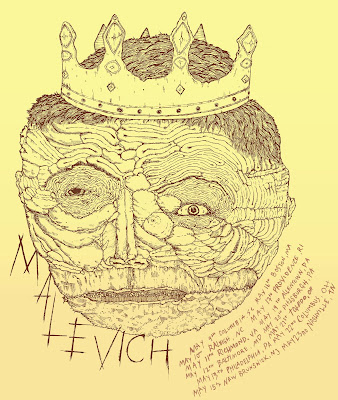 Their debut cassette is 10 tracks of intense and focused noise. 'Only the Flies' opens with the stellar "Solus" that lets you know exactly what you are in for. And holy hot damn that closing 20 seconds is phenomenal as the bass jumps to some higher notes while the vocals cross back and forth between wailing screams and gutteral growls. "A Light in the Darkness that Faded as I Approached" reminds me of Loftus and Black Nail at 42 seconds. When listening to the first 40 seconds or so of "Always, Loss", I unintentionally picture a winged bat-like creature reigning fireballs upon a burning city. Yep, it sounds pretty much like that. "Le Tout Bas" strays from the "norm" of the opening three songs and does more than just top two minutes (it's five and a half, actually) as it takes a slow, noisy and doomy turn with restrained notes and vocals that sound like the pits of hell, only to make a surprising left after 3:30 as it ascends out unscathed with beautiful instruments...that are dashed at 4:40 and left dead in the street. "Perennial Self" takes it easy for a little until it refuses to be contained any longer, so by 34 seconds shit goes bananas and by 1:17 there is nothing left but dust. "Drought" is a mere 32 seconds, but it packs one hell of a punch with amazing vocals and a punishing midsection from about 12 to 22 seconds. "Moult" is a slow and brooding number that tops six minutes, but opens with an epic, almost Deafheaven sounding first 30 seconds, followed by another 20 seconds of metallic hardcore that sounds like it's straight outta Germany. "Disassociated" is the perfect balance between the fast, batshit, insane stuff and the slower, darker and epic parts. This makes track 8 one of my favourites and an excellent starting point in case you'd like a mean, median or average...hooray for elementary school math, David. "Represented in Bondage" might be my favourite on this LP, with more amazing vocal work and sinister instrumentals that builds continually and hits home at 52 seconds with blackened hardcore that borders on emo-violence. 'Only the Flies' wraps things up with the very ominous and plodding "Death Will Never Be Enough" that seems to disintegrate by 4:30 but continues on until 6:48.

Wow, what a debut. I need to see this band. So, so good. Be sure to check out the band on their remaining US tour: