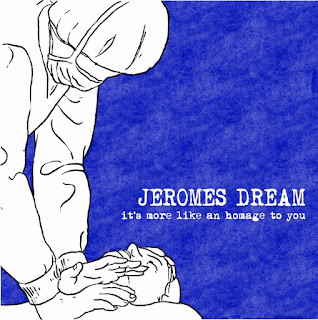 Hooooooooooly shit, here are five premieres for the new JEROMES DREAM tribute compilation cassette titled 'It's More Like An Homage To You'. The 29-band act of love will be released digitally (with proceeds going to the Flint Rising charity) and physically (via cassette) on May 16th, 2017 through Zegema Beach Records, Coniine Records and bunch of the bands, but you can pre-order a tape now here from ZBR (Canada/World), here from Coniine Records (USA) and here from Senza (USA), which is one of the bands.

I posted my discography review of the seminal emo-violence band Jeromes Dream back in March of 2014 which you can peruse at your leisure here. A trailer was posted about a month ago that you can check out right here. There have also been premieres for the following bands that can access by clicking on the artist: Algae Bloom, Under Glass, Our Wits That Make Us Men, Senza and Wolf Teeth.

I think it is vitally important to mention the function and importance of the Flint Rising charity, as the labels and bands collectively decided on this donation. For over two years the people of Flint, Michigan have been living and dying with poisoned water. The governments, both municipal and federal, have done nothing but lie, ignore and even profit from the residents' nightmare. Like most things in this world, if corporate and government interests are at risk, then fuck the people.

No. Fuck you, governments. Fuck you and your slavery to corporate interests led by greedy, selfish and evil pits of waste that masquerade as human beings. Flint has been abused for so long it's routine now. It's fucking shameful. Please donate the measly $3 on May 16th (and afterwards) to the labels involved and Senza so we can put our money toward making the world a better place instead of continually bowing to self interest, conformity and apathy. The labels and bands would obviously appreciate the support so they can keep making music and releasing stuff, but please donate to people who are in real need, first and foremost. Donations can be made now as well as over and above the $3 on bandcamp at the Flint Rising page, which I've linked here.


COMMUOVERE - "What Other Adjective Would You Have Me Use For The Word Good?"
Bandcamp
Facebook

MASSA NERA - "The Monologue Of The Century"
Bandcamp
Facebook

SLEEPER WAVE - "A Present For Those Who Are Present"
Bandcamp
Facebook

Side A: - Tracklisting
1) KOMAROV - "My Most Recent Right Left Brain Argument"
2) COMMUOVERE - "What Other Adjective Would You Have Me Use For The Word Good?"
3) MASSA NERA - "The Monologue Of The Century"
4) THISISMENOTTHINKINGOFYOU - "A Second Grade Art Project"
5) UNDER GLASS - "Unreleased #1"
6) Мятеж - "Exit 29 Collapsed As I Drove By"
7) WOLF TEETH - "His Life Is My Denim Paradise All Day, Every Day"
8) APT SUT EIC OCO - "The Last Time We Talked"
9) SLEEPER WAVE - "A Present For Those Who Are Present"
10) COME IN, ACTION TWO. CAN YOU COMPLETE THE MISSION? - "And Just Like That The Year Is Gone"
11) MONOCHROME NAUSEA - "The Teacher Says To His Pupil"
12) YEARS PASS LIKE SECONDS - "Untitled #2"
13) SENZA - "How Staggering Is This Realization"
14) мища - "It's More Like A Message To You"
15) AN ANT AND AN ATOM "What I Learned At This Years Regional Optometry Convention"

Pre-order from Senza
Posted by Dave Norman at 16:32