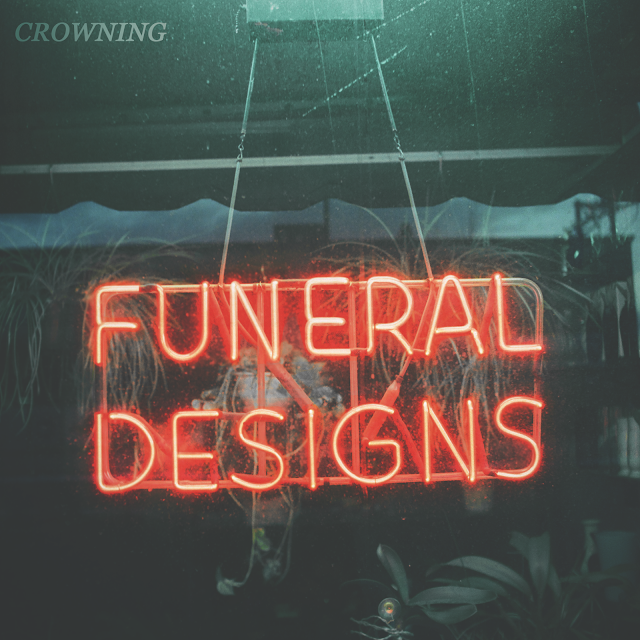 Who is CROWNING? I asked myself the same question when I opened my email inbox a few days back. Well hot damn, CROWNING is three fourths of Pregnancy Pact, a band that sent me their three song EP earlier this year, but a few days before they broke up. Needless to say, my attention was hooked. They told me that they were forming a new band that would sound a bit similar but also much heavier. They were so right. CROWNING are insanely good, intense as fuck, noodley, thick and chaotic, yet with a nearly constant source of melody to stabilize the listener during warp drive. Justin had this to say of the band:

"We're from Chicago, the three of us (myself, Myles and Dave) were in Pregnancy Pact, and then when our old bassist moved, we asked Vanessa to join and we ended up as Crowning. We recorded the album with Pete Grossman at Bricktop recording, and it was mastered by Brad Boatright at audiosiege. Our creative process is fueled entirely by crippling social anxiety and dollar store snacks."

I was so excited about this 'Funeral Designs' demo EP that after jamming it thrice I asked if I could help CROWNING do some cassettes. So, following this premiere for "Buddy Dwyer" fans can hear another new track titled "Velleity" on January 1st, 2017 that will appear on the Zampler #8 compilation. The 'Funeral Designs' cassette release will be limited to 30-50 copies and should be available late January of February at the absolute latest. Let me quickly go over each of the five songs in order to further wet your appetite!

The 'Funeral Designs' EP opens with "Funeral Designs" which wastes no time going full tilt through dark and dreary hardcore. This all explodes in a flash right before 30 seconds with some melody before dropping a good few feet into the ground thanks to a pulverizing breakdown. "Velleity" follows and opens with about three seconds of chaos before flippin' over and bustin' out the clean and noodley instrumentals. This overlaps back and forth with the aggressive screaming until around a minute when the band lays into the listener just like Furnace used to. As mentioned above, it will also be featured on the upcoming Zampler #8 in less than two weeks. "Swivet" is 56 seconds of beautifully woven heavy screamo not unlike the new Youth Funeral LP while "Exposure" takes us on a brief ride through some atmospheric and haunting soundscapes before laying waste to the second half of the track.


Today's exclusive song premiere is the closing track "Buddy Dwyer", which is also the longest song, clocking in at nearly three minutes. This phenomenal piece of work ties together everything that makes the band great but also injects slightly more melody and accessibility amidst the destruction. The first half reads like a homework assignment as it is very well thought out and intricate in its heaviness while the second half sounds as if it grew organically out of the rotting remains of the preceding behemoth, sprouting a fantastic array flowers and colours that bring the EP to a beautifully complete conclusion.
Posted by Dave Norman at 16:48