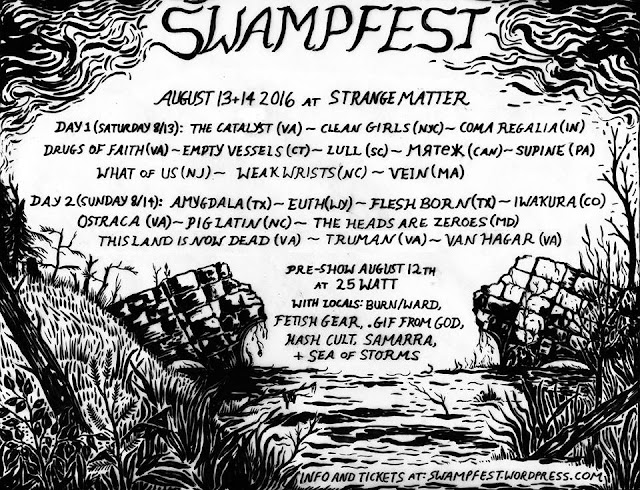 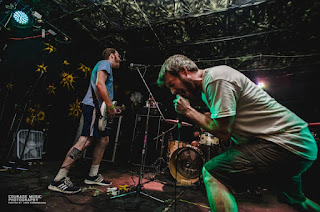 SUPINE
I'd never listened to SUPINE before but they were a great opening act. The chaos was jarring and I thoroughly enjoy their sound. I also met them and they were super nice so I'm extra stoked to hear what they produce next!

VEIN
VEIN fucking destroyed. Holy shit this was intense. Everything about this band is massive, heavy and intimidating. In my recent .gif from god interview (linked here) it was discussed about how the two bands will likely be releasing a split 7" in the near future. If that happens look the fuck out. Oh yeah, their sound. The band plays a destructive combination of metallic hardcore, metal and screamo that's kind of like Converge and Psyopus meet Enkephalin.
Link to song *2*
Bandcamp
Facebook

мятеж
This was our last show of our little min-tour and it was definitely our best set. I felt quite confident about how we played everything and despite being on a stage I was still able to have a good time. Chris knelt down and gave an open heart talk about being out of music for over a decade and how inspiring the Richmond scene was. There was even a teacher who pulled him aside after the show and thanked him for his words about the arts community. Jazzi (from Van Hagar) filmed the entire thing, as did Mitchie (from .gif from god/Truman/Samarra/etc.) but Jazzi had closer shots so I've used those. Thanks to everyone who watched us play, it was an amazing experience that I will never forget. <3
Full Set linked here
1 - June and July, Life Over Die

2 - That Ain't the Frickin' Christmas Star


EMPTY VESSELS
This two-piece punk/hardcore/screamo/noise outfit followed us and were great. Both members provide vocals and the guitar/drums combo is surprisingly thick and full. If you haven't seen them and have a chance to, don't miss that show! Seriously, the amount of energy will floor you.
Links to songs *2* / *3*
Official Site
Facebook


WEAK WRISTS
I'd be lying if I said that WEAK WRISTS didn't steal the show, because by golly, I'd go as far as saying they stole the goddamn fest. This set was so good it was ridiculous. The mixture of metallic hardcore and emo-violence should be right up most readers' alley. I should also mention that I was asked to help out with their full length and couldn't due to monetary restraints, but upon seeing their set I wish I'd sold some personal records in order to release their phenomenal debut. It's two months later and I still can't get over how good this was.
Links to songs *2* / *3* / *4*
Bandcamp
Facebook

COMA REGALIA
Will this be the legendary COMA REGALIA set? Probably. Shawn and Brad were accompanied by Tom Schlatter on bass and Jon from Ostraca/.gif from god on drums. It was amazing. Just watch the video already.
Links to songs *2* / *3* / *4*
Bandcamp
Facebook

WHAT OF US
Despite two of the three vocalists being nearly unable to talk before the set due to "losing their voices", WHAT OF US sounded fucking amazing, as per usual. They tore through their set and definitely garner a lot of attention when playing, as all heads generally turn to see what all that fantastic noise is. Easily one of the best American bands around and if you haven't picked up their 12" split with Coma Regalia do so here.
Links to songs *2* / *3* / *4*
Bandcamp
Facebook

CLEAN GIRLS
This eclectic three-piece from New York are a trip, playing some kind of post-punk/noise hybrid. I happened to catch the song "The Blade" from the Swamp Fest 2016 tape compilation (linked here).
"The Blade"

DRUGS OF FAITH
Another three-piece followed, this time Northern Richmond's DRUGS OF FAITH. The band played punk/thrash/hardcore/powerviolence from what I picked up and have releases spanning almost 15 years!
Official Site
Facebook

THE CATALYST
I've been a massive THE CATALYST fan for over a decade, as I bought 'Mariana's Trench' on 12" a very long time ago. I never dreamed that I'd be playing the same show as them. Plus, they utilized two drum kits for a few songs, which was crazy to see, especially considering they played one of my favourite songs, "Too Big to Fail" which is the video embedded below. Perhaps it's also worth noting that I saw some fella walk into the venue with a Litany For The Whale shirt and I fucking lost it and got his attention (I was stuck behind a row of merch tables) so he came over. I basically pointed at his shirt and said, "Holy fuck, where did you get that shirt. That band was amazing." to which he replied, "My band toured with them and they're awesome." I didn't quite put two and two together, so I asked him, "What band do you play in?". He responded with, "The Catalyst," and I nearly exploded with joy. True story. A fantastic reunion, and hopefully there will be more to come!
"Too Big to Fail"
Links to songs *2* / *3* / *4*
My Space
Facebook
Posted by Dave Norman at 17:42