I found out about MOTHLIGHT a few years back when a friend by the name of Thom Carney sent me his band's material for this blog. I enjoyed the material immensely but waited for a premiere before reviewing the band. When I was offered the premiere I didn't have the time to write up a discography review or post all the links, etc. so I held off. Then the band ended. But, as I still speak to Thom quite regularly. he agreed to do a post-humus interview about his time in MOTHLIGHT and a few other tidbits of information.

In 2013 the band released their demo tape called 'Memento'. These four tracks were excellent debut songs and "House Of Salt" and "Monument" really spoke to me, as the first was the heaviest yet catchiest and the second had some mad Polina and Matsuri vibes going on. The following year they were involved in a killer '4-way 10" split' (which you can buy here!) and contributed two fantastic, albeit short, songs titled "Cold Brewed" and "Ever Green" which showed a thicker, heavier side of the band. By 2016 and their final 'Tour Tape' EP the band had moved in an even heavier direction, most likely influenced by Yusuke (Thom's other band), Itto (fellow Chicagonians) and Guidelines (Thom's band crush...and mine too). These four songs are the strongest and definitely the ones worth checking out first if you haven't heard of MOTHLIGHT before.

As I stated above, I was lucky enough to get to premiere a song from the band's final release, the 2016 'Tour Tape' which is, for lack of a better word, ballin'. The following excerpt is from my review of said tape in said premiere, linked here, and below that is my interview with Thom Carney from the now defunct band.

"'Fiction Becoming Reality' starts the tour tape off in a disjointed yet melodic fashion. The screaming and jazzy chaos weave in and out until the halfway point and then some slower but no-less epic instrumentals lead way to the final 20 seconds which have the song imploding in on itself. Song two is called 'Immutation' and it gets going just before the 30-second mark and is a fucking stellar track. The lead guitar on this isn't too far from Gillian Carter and Neil Perry territory which does a hell of a lot more than tickle my fancy. After the craziness subsides at a little over a minute the song is led by rolling drums and heart-beating bass which culminate at 2:20 in fantastic fashion until the close at 3:08. The last new song is called 'Drawing Out the Dead Ends' and it was my pick to post as a premiere because it's unbelievably good. By 2:58 MOTHLIGHT dismantle a lot of screamy hardcore booby traps by showcasing some truly intriguing and engaging music that jumps all over the proverbial board of genres. You've basically got one minute of amazing screamo, a minute of softer ambient stuff and then a final minute of utter annihilation. "House of Salt" is the only non-new song on here, but it was re-recorded for this release." 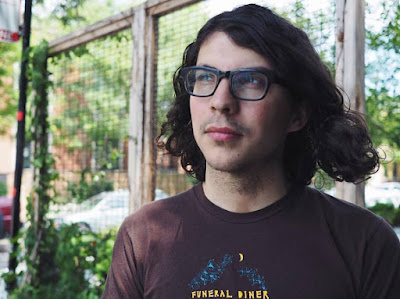 1) Who are you?
I'm Thom, I played guitar and did vocals in mothlight.

2) Tell us about your musical history including how you got hooked on music, who introduced you to new stuff and what bands you've played in.
When I was a young teenager I was really into metalcore and post-hardcore and, like a lot of people my age, eventually found screamo through the internet and the liner notes in cds (mostly Thursday albums). Now I mostly find new music from blogs and friends telling me about music or posting about it online, as well as seeing bands at shows. I've played in a few bands that never really did much, but the notable projects I've been a part of, aside from mothlight, are Yusuke and Gas Up Yr Hearse!

3) Why the name Mothlight?
The name mothlight was chosen by our original vocalist. I think he just thought it sounded cool, but we found out that it was also the title of an experimental short film, which made us like it more. It doesn't have much significance beyond that, which I somewhat regret, but I think we could have certainly done a lot worse.

4) What were the primary influences and motivation for Mothlight?
Mothlight was a vehicle for a group of friends to play music together that was different from what most of us had done before. I think some of the common influences musically were local bands like Lord Snow, Itto, Lautrec, and Suffix, as well as more well known screamo bands such as Raein, Loma Prieta, Matsuri, and La Quiete. Also, the four of us that were in mothlight at the end all love My Chemical Romance.

5) How did the band and sound evolve from the Momento EP to the Tour Tape?
There was a lot of time between our first release and our last. In that time, we got a new drummer, and lost a vocalist, going from a 5 piece to a 4 piece. I think we all became better at our instruments and more proficient at writing together. Our musical goals also shifted, the last songs that we wrote were consciously "heavier" with more instrumental sections, which was due in part to no longer having a standalone vocalist. We had gone on tour, seen new bands together, as a group, and had more musical common ground in the end, despite our tastes all changing somewhat from when the band had started.

6) Did you play many shows or go on any tours? What show was your favourite?

We played a decent amount of shows throughout our time as a band, but towards the end weren't playing many locally. We went on two small tours, one of which was cut short, unfortunately. My favorite show was definitely the first Swamp Fest.

7) Can you please reveal something about Mothlight that people are not aware of outside of the band?
Somewhere, there's an unreleased mothlight song from the original lineup that we all hated and didn't do anything with.

8) What are you listening to nowadays that deserve shout outs?

Recently I've been listening to Black Marble, Merchandise, Sade, Rainforest Spiritual Enslavement, Eros+Massacre, and Envy. Special shout out to the new Ostraca and .Gif From God songs that haven't been recorded. Samarra too.

9) You just moved to Richmond, Virginia. I saw you at Swamp Fest. How was that? What's it like living there now? What else is on the horizon for Thom Carney as well as his musical endeavors?

Swamp Fest this year was really good, just like last year. I didn't play this time, but it was still a great time. I've been loving Richmond, I have so many friends here and it's cheap enough that I haven't had to get a job yet. I have two new projects that are currently writing and rehearsing, another in the planning stages, and I've been working on electronic music by myself. Hoping to keep busy between all that, recording bands, and doing design work for bands.

10) Is there anything you'd like to say, whether it be personal, social, political, etc?
Thanks for interviewing me and posting about mothlight. We weren't a very political band, but it would be remiss of me to not take this opportunity to remind everyone to support those being oppressed, both in our local scenes and otherwise. Especially if you're a white guy, like me, and don't experience the disadvantages that other people do.