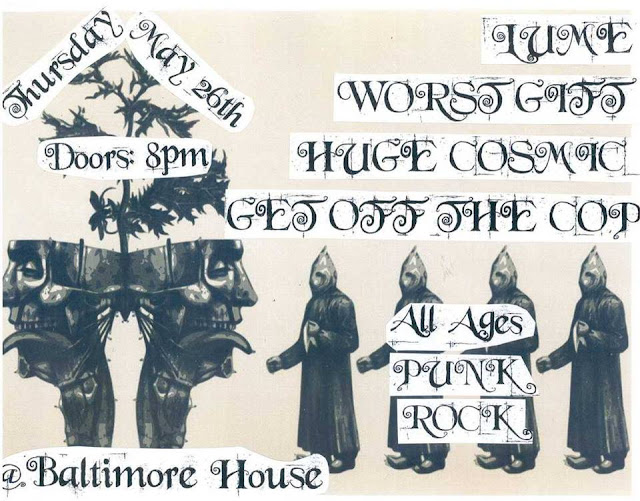 
HUGE COSMIC
The eclectic blend of punk, rock, indie, garage, grunge, hardcore and even rap. The vocal interplay between Dean and Jacob is seamless and now with addition of Adrian from Terry Green taking on bass duties instead of vocals it really helps bring this band's sound together. They released a split on Zegema Beach Records earlier this year with Terry Green which you can grab here.

WORST GIFT
As always, WORST GIFT played a super tight set. They also played two new songs, the first of which blew me away, especially those drums! The stoner grunge mixed with post-hardcore is infectious, grooving and polished yet raw. I helped release their 12" 'Shitty Loser Riffs' (grab one here) last year and it rocks. Check the "Extra live video" below for the second new song which has some great dual vocals by Suze and Tim.


LUME
LUME travelled all the way from Chicago for this show and did not disappoint. Having already passed through Hamilton, quite a few locals came out specifically to see this band and their thick, pretty, ambient and melodic space rock. The 3-piece jammed out for almost half an hour and any fan of Hum should be all over this so basically magine Hum meets some Pelican influence on the guitars and you're pretty much there.


GET OFF THE COP
GET OFF THE COP is definitely getting a following here in Hamilton. The dirty, raw and screamy edge of the 3-piece is palpable as they shot through about 22 minutes worth of material in support of their new 7" which you can jam here. It's a very interesting mix of straight forward punk rock, a heavily whacked guitar with eerie cackling and venomous screaming. Unfortunately my camera began to trip out and was constantly out of focus, as can be witnessed at the end of the 2nd video posted below.