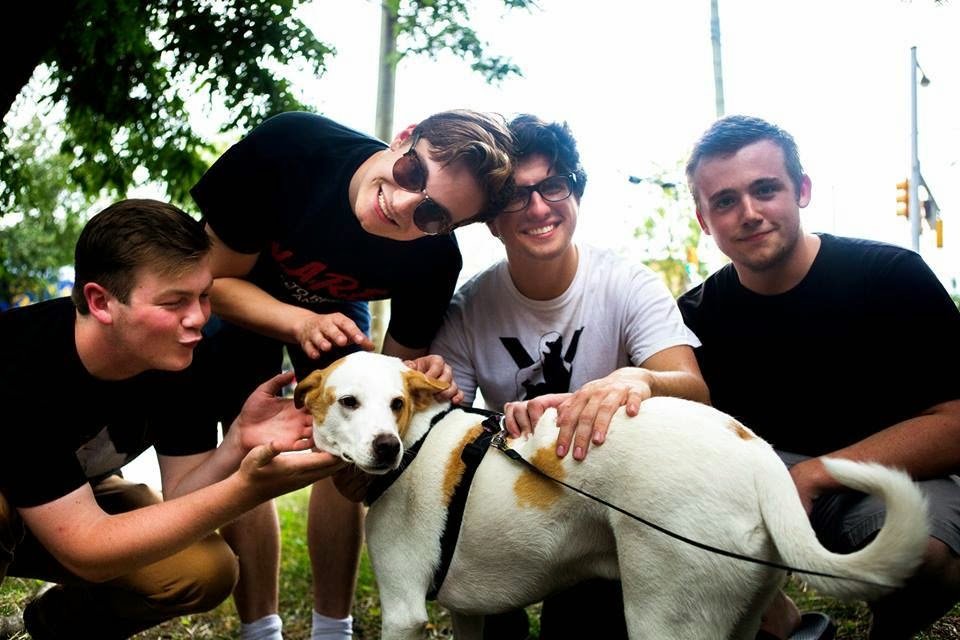 Let something straight, YOUTH NOVEL is definitely one of my favourite bands right now. They seemed to come out of nowhere when  Jon Riley (bass) sent me the band's material after it was recorded. My jaw fucking dropped into the goddamned basement. Seriously, check this band as soon as possible.

YOUTH NOVEL plays a throwback style of screamo that they connect to 90s emo and some of the stuff that's being released nowadays (Ice Hockey, Kidcrash and Loma Prieta come to mind). The new cassette 'Turned Around Abruptly Beside a Mirror and Jumped at My Own Reflection' that I helped release through my label Zegema Beach Records along with Sean from Skeletal Lightning Records, simply put, is unreal. 4 songs in a mere 10 minutes will leave you salivating for more and is just the right amount to really wet that palette. The band busts out 2 extremely screamy vocalists (both of which play guitar, although the primary vocalist might have hung up the guitar to focus on vocals, with another guitarist joining the band) that exchange back and forth over sometimes melodic and groovin' instrumental passages before delving into chaotic territory. Think La Quiete in this sense. My favourite tracks are the short and spastic "II" as well as "IV" which is similar but longer and drawn out with a very dancy passage that could belong on a Leer or Van Johnson record.

Although they haven't released much material, I am itching to hear pretty much anything new by the band because I expect it to be phenomenal. No pressure, guys. They are writing for an LP that, science willing, I will be able to help release and hopefully will be dropped sometime 2015. Whether I'm involved or not is irrelevant, as the record will easily be one of, if not my most anticipated release for 2015. They are also writing for a split with Ice Hockey and Mothlight which Zegema Beach Records will definitely have a hand in releasing, along with my boy Olin at Friendly Otter Records.

In terms of their 2013 material, "Boyish" and "Stay Here" are pretty good, but the Third Eye Blind cover "Losing a Whole Year" is excellent and a departure from both their early and late style, but does bear resemblance to the earlier stuff rather than late, as at the time Sean Horner did guitars/vocals and John Dickinson was doing vocals, guitar, drums and bass. Now Jon Riley plays bass, Zach Geimer blasts the drums and I think Jonathan Chun is the new/2nd guitarist, while John will be focusing on vocals and Sean will continue to be the guitarist and backup vocalist. The new material (I'm talking EP here) is much faster and screamier, while the older songs are much more 90s emo oriented, focusing on slow rhythms and builds rather than their full-force screamo onslaught of their physical EP.

Partially due to my overwhelming love for the band, they were nice enough to answer 20 questions via email for this post. I've included my 3 favourite questions/answers but you can click here or below to access the entire interview. If you want to grab a copy of the tape click here to snag one my 60 cassettes which are dwindling faster than most ZBR releases, and is part of the first run of 150.


If you could go back in time to see a band, who would it be?
*Jon: Ten Grand or The Pine
*John: Majority Rule and ...Who Calls So Loud
*Sean: Talking Heads, Rome, 1980. Adrian Belew plays with them and it's nuts.

I can dig classifications for genres, but when people label themselves as "emo" I find it strange. Thoughts?
*Jon: I think genres are extremely important, especially in establishing scenes and networks for your band to play with/tour with/flirt with/etc. That being said, I think emo is a label that is too broad. The term has become ambiguous. I could see an “emo” band that sounds like anything from Fugazi to American Football to My Chemical Romance. I don’t know how I feel about any band labeling themselves, though. Let the listeners classify.
*John: Yeah, I personally hadn't seen that self-labeling of "emo" happen at all until recently. It's whatever, over time genres become malleable, so I'm not exactly surprised that more people are using it to classify themselves.
*Sean: Music is absolutely the most important thing in my life, but I find it weird when people base the majority of their personal identity on a subgenre of music. That's boring to me.

I heard Jon Riley (the bassist) is dead sexy, care to elaborate?
*Jon: I’m actually a model, so it’s nice that you say that.
*John: He's got great hair. Many times he uses it to his advantage to manipulate people. He's also the best liar I have ever met in my entire life, which makes him a constant enigma in my life.
*Sean: Jon Riley is like if Tom Cruise was built like a hockey player and had sick hair. But what most people don't realize is that he's even more beautiful on the inside.

***Click here to go to the full, 20-question interview on the Zegema Beach Records***