I have but another five days in Dunedin, New Zealand before resetting the family life back in Canada (but British Columbia, this time) so it seems like a good idea to do a string of Kiwi posts. Last week the band I am in called SWALLOW'S NEST recorded seven songs for a few splits and then had a fundraising show for it that doubled as my farewell gig. Gig, Lana. GIIIIIIIIIG! It was a remarkable experience that showered me with more support here than I received after five years of doing things in Hamilton, Ontario. Four sweet as bands played, each with a very different sound. Here is my last show review from New Zealand 😭 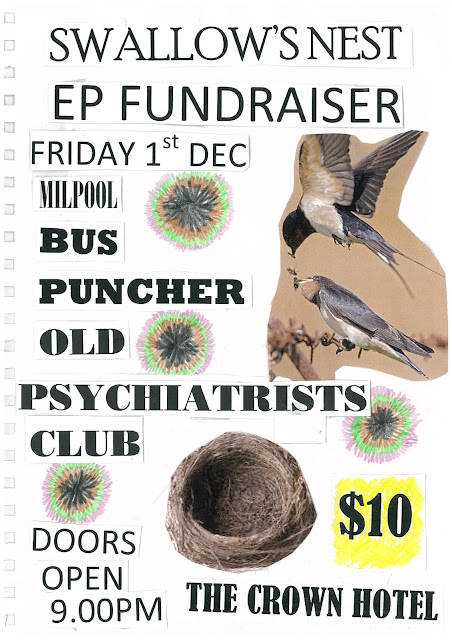 MILPOOL
I enjoyed MILPOOL when I saw them play at my only show with the other band I did vocals for in New Zealand called Emö Lendvai (linked at the bottom of this post). But this was awesome. Their live sound mix was much more balanced and the band jammed about, bouncing back and forth between blown out grunge rock and super groovin', spacey indie rock. The latter of the two is exceptional and I highly recommend the embedded video. Cuz it's fucking awesome. Also, I spoke with guitarist/vocalist Tom and he was a super sweet chap. All the best for this best and his other project The Rothmans.

Link to song: *1*
Facebook
For fans of: The Rothmans, The World Is A Beautiful Place And I Am No Longer Afraid To Die and Weezer

BUSPUNCHER
Formerly Turbulent Juice, the band changed their name, possibly due to the fact that they went through a handful of vocalists in a just a few months. The super nice people in this band ripped through 20 minutes of powerviolence growls and hardcore punk. The instrumentals varied a bit more than the vocals, with some songs (like the two I filmed) coming across as pretty standard, crusty, dbeat hardcore but a few other songs were much more intricate and even resembled Perth Express at points. Pretty cool, very brutal.

SWALLOW'S NEST
This was pretty emotional for me, being my last set with the band and our first/only set with two vocalists, as Lana is taking over as the primary vocalist when I'm outta here next week. We fuckin' nailed this set and we were all really stoked about it. We also recorded our seven songs this past week and a half so we'll have three releases coming out in the first quarter or so of 2018, including a 4-way split and a 7" split with Chicago's Crowning. The song I've embedded below is our newest titled "A Subtle Knife for New Doors". It's pretty massive, very angry and includes some ridiculous drumming by Gabe during the second half. The lyrics are about erasing the rich, corporate, garbage, human beings from the face of the Earth or our grandchildren are all fucking dead. Although, it's pretty much too late.

Links to songs: "Apathy as an Infinite Manifestation" / "Karma Kramer"
For fans of: Dangers!, Litany For The Whale and Council Of Rats

OLD PSYCHIATRISTS CLUB
Known affectionately in New Zealand as OPC, the two piece experimental rock/hardcore/noise duo played a jarring and intense mixture of Hella, Sewage and The Paper Chase with some vocals reminiscent of Circle Takes The Square. The drummer Nick was initially going to be the Swallow's Nest drummer but couldn't commit due to being in other bands as well as recording most of the punk rock in Dunedin, including Yung Nat$, Swallow's Nest and The Rothmans as well as a plethora of others.
Link to song: *2*
Bandcamp
Facebook
For fans of: Hella, The Paper Chase and Stresser
Posted by Dave Norman at 03:21