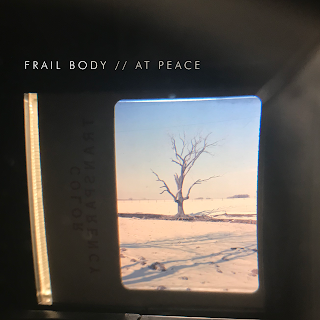 For fans of: Snag, Dowager and Youth Novel
Bandcamp
Facebook

Recently I was asked to check out FRAIL BODY. I had never heard of FRAIL BODY. Apparently 2,100 other people on facebook have. And here I was thinking I'm on the screamo game. Maybe not so much, Monsieur Davide. Super lucky for me, and for all of the OMSB readers, I've been asked to share the opening track off of the upcoming 'At Peace' EP by the Rockford, Illinois three-piece. And hoooooly fuck it's a banger. Clocking in at 3:44, this thing hits pretty much everything I love about the genre. It's got a nice, swaying intro for almost 30 seconds before all of the instruments crash in together and build the opening even higher. Just before the one-minute mark they transition to the next phase, which I like to call DEAR LORD THAT BASS IS INCREDIBLE.  The screaming vocals drop in shortly thereafter, sporadic and intense. Around 1:30 things slow down a tad and from 2:00-2:30 the band opts for some ambient, post-hardcore jams before rebuilding the song and letting loose at 3:10 with utter destruction, breakdowns and kickass drumming. Woah nelly I need to jam that sucker again. The EP will be released on December 22nd, 2017 in its entirety (three songs) digitally with a physical release likely to follow in early 2018.

I didn't know about FRAIL BODY before, but goddamn I'll be scopin' them hard in the coming years.  For reference's sake, guitarist/vocalist Paul played in Anzio, bassist Nic played in Roanoke and Sleeping Habits while drummer Nicholas spent time in Kingmaker and currently plays in PAINS. Hope y'all enjoy this as much as I did!