THE WORLD THAT SUMMER - Day #2 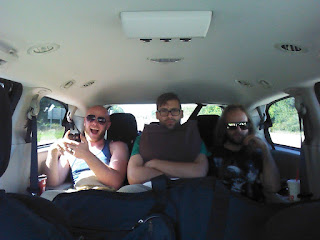 Players: Carcajou, The World That Summer, In The Name Of Havoc and The Owls Seem What They Are Not


THE OWLS SEEM WHAT THEY ARE NOT
A late addition to the show, this (I think) 7-piece came in as a 3-piece (guitar, violin and vocals/flute/additional guitar) which made so much more sense after I found out that they were short four members. The songs had moments of clarity and sections of awkward space, and I think the video linked below is a prime example. The first five minutes is fantastic and I love the lullaby of earthy, womby tranquility it provides, but the final four minutes seems to lack cohesion (likely due to more than 50% of the members being absent) and wandered to the point of me turning off the camera to conserve battery. I would love to see them fully formed.


IN THE NAME OF HAVOC
We played with IN THE NAME OF HAVOC the month prior at this show and we were impressed, plus the members were nice people. Buuut what the hell, at this show we were not impressed, we were fucking blown away. Not only did the locals play newer material, they also sounded great and were tight as fuck. I was especially blown away by the drumming, dear lord.
Link to song *2*
ffo: Every Time I Die and Thrice
Bandcamp
Facebook
-----o-----


THE WORLD THAT SUMMER

This was a very fun show. We had a sound person so the videos sound more powerful than usual, I'd say. Although we chose a very sweet intro from Mr. Robot for the beginning of "What is Dead May Never Die", I've chosen our song "No Hugs for Lucas" from the upcoming 2x12" titled 'Eight Feet Under' that is currently at the plant. A million thanks to Max and Kenny for helping set up this show for us, it was an awesome night!


CARCAJOU
I knew Jonathan, the vocalist of the now defunct Nous Étions, before seeing CARCAJOU and I'd also heard the band's first demos from over a year earlier. Neither of those things prepared me for what was to come, because CARCAJOU fucking owned. Seriously I was blown away. The epic songs ranged from a few minutes to 10 and included storytelling, enough genre shifts to tilt a camel, amazing individual instrumental work (ranging from metal/hardcore to screamy jazz) as well as a commanding vocal presence by Jonathan and his myriad of screams, yells and growls. It should also be noted that all four videos below are good, but I just happened to not film the best two or three songs, so in all honesty these don't even do the band the justice they deserved from that night. Look the fuck out when these fine folks release their next record cuz it's going to floor you.
Link to songs: *2* / *3* / *4*
ffo: Nous Étions and Daitro
Bandcamp
Facebook
-----o----- 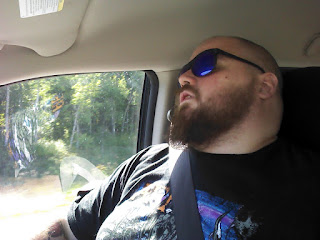 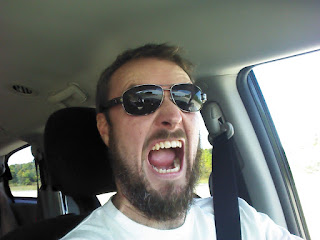 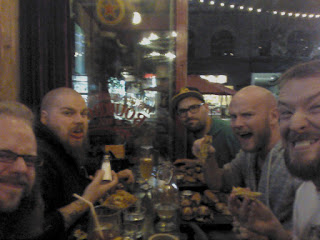