On July 25th, 2016 THE REPTILIAN came back to see us in The Doors Pub in Hamilton after travelling all the way from Kalamazoo, Michigan in the USA. The three extremely kind fellas visited us back in Aug of 2014 with Two Knights, which you can view here. After chilling at my place all day we headed to the venue. The place filled up quickly and Wimp City pulled in a ton of people who stayed for the duration of the show. There was many a merch sold, especially by THE REPTILIAN, from whom I acquired distro items for their new 'End Paths' cassette (buy here) and 'End Paths b-side' flexi 7" (buy here). I've done a quick review/overview for each band, starting with the opener, and included the videos I took as well as links to each band's bandcamp and facebook site. It was definitely a thoroughly enjoyable show! 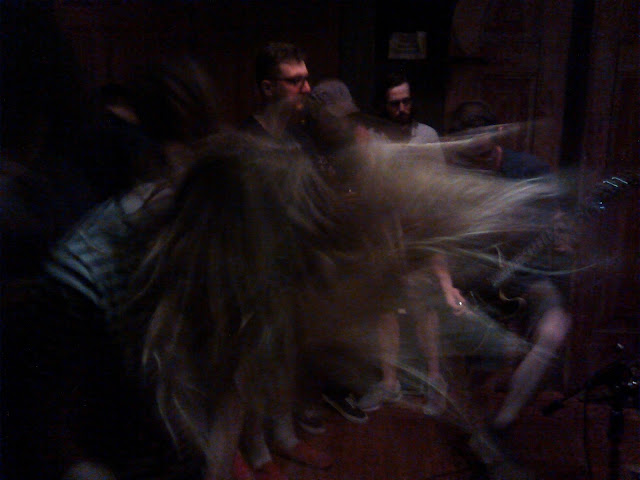 NANETTE
I've seen the Nanette fellas a few times now, with the band always showing promise but sounding a bit muddled live. This night was exactly what I was waiting for, I flawless set with great sound. I was able to see and hear Nanette the way that I can only assume the band's wants to come across; driving, emotional, catchy, heavy and screamy. Check out the video below for a fine taste of Toronto's Nanette.


WIMP CITY
As stated above, Wimp City did a fantastic job of bringing some awesome folks to the show. The two-piece turned three-piece has now reverted back to a two-piece of bass/vocals and drums. The rollicking sassiness of this punk/hardcore hybrid is infectious and it seems like the band is playing more shows nowadays so I'm excited to see where they go from here.


THE REPTILIAN
The decade-old Kalamzoo 3-piece played a short but sweet set of just over 20 minutes comprised primarily of new material from their stellar 'End Paths' full length that was just released. The last time The Reptilian played I was impressed, but this time I was floored. The energy injected into the new songs live tops the excellent sounding recorded material and watching the three get really into the songs as well as Russ pulsating with the music was powerful and magnetic. I always liked The Reptilian, but now I love The Reptilian.

TERRY GREEN
I don't when the plateau is going to be reached, but Terry Green gets better and better every fucking time I see them. With a new 12"LP on the horizon, fans such as myself have been salivating for over two years waiting for a proper recording and release from these four Mississauga sweethearts. The band played songs mostly from the upccoming record and did so with the perfect mixture of intricacy, rawness, restraint, passion and chaos that results in the band being discussed by new listeners post set with exhuberance.