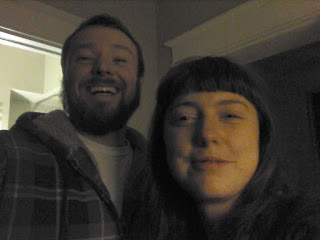 On February 6th, 2016 WORST GIFT held their release show at D-Beatstro for their new four-song 12" entitled 'Shitty Loser Riffs'. I've posted a video for each band below with a link to another song for each of THE WORLD THAT SUMMER, BLACK LOVE and WORST GIFT. Hot damn it was a kickass show.


THE WORLD THAT SUMMER
This is the band I scream for. We played. I enjoyed myself thoroughly. We are releasing a new song on our bandcamp tomorrow, Wednesday February 10th.

TERRY GREEN
As usual the Mississauga young'ens brought their A-game and played a very diverse set, including an instrumental jam that preceeded "Instant Relief" which just so happens to be the video I recorded and have posted below. Their mix of emo and screamo as well as their newly incorporated sassy hard rock groove is fucking electrifying.

BLACK LOVE
These six very talented fellas traveled all the way from Montreal to play this show as well as one in Peterborough the night prior. The problem with the night before was that JF from the band accidentally left his pedal board in Peterborough, but they didn't find out until after the set, so needless to say that must have been rather stressful for the band. After borrowing some of Terry Green's gear the band blasted through five songs with a heavy emphasis on new material as they played two new songs and three old songs, The new songs are big, and of the three I didn't get the best one, but this song is still killer! That's a testament to the new material, goddamn, so good.
Bandcamp
Facebook
Extra video

WORST GIFT
This three piece turns heads every time I see them. Three members, three instruments and three voices. The band played about 50% new material which was very cool to see and hear, and the crowd was definitely digging it. The strange blend of sludgy garage rock and post-hardcore creates a truly intoxicating aroma of jamz. I recorded two of the new songs, but unfortunately the first is cut off at the end because I thought the song was over. Oops. Still, I got about 80% of it or so. The other song is very grooving and worth checking out. The new material seems to be more focused on the guitar interplay, especially the speed of it, although the second song I've posted is much more laid back...so basically what the hell am I talking about. Anyhoos, be sure to check out their new 12" 'Shitty Loser Riffs', as this was the release show for it! I've got copies for sale here if you are interested, or if you're in the area check the band out at some of their upcoming shows, such as this doozy with Albatross, HX KY and Glowworms.
Bandcamp
Facebook
Extra video
Posted by Dave Norman at 18:59