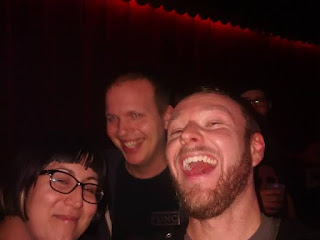 Will Killingsworth - a name synonymous with excellent music. A question that pops up in my head nowadays is, what exactly do I associate him with primarily? I first heard his name over a decade ago when I started listening to Ebullition releases and he became a name I associated with Orchid. After that I found out about Bucket Full Of Teeth and I've been obsessed ever since. Next up was the band he still plays in, Ampere, But it doesn't stop there, because he also spends some of his time running the extremely influential record label called Clean Plate Records and a few years ago reformed with most of the previous Orchid members under the name Ritual Mess. Oh, I almost left out his recording/mastering/mixing stuff with Dead Air Studios. In the end, there is no need to try and classify him nor specifically associate him with any single project because that would pigeonholing. He's just a very talented and passionate person who has been involved in the punk/diy community for 20 years. After meeting him at the Austin Blood Alliance Fest in early 2015 we were able to set up this interview that he graciously took the time to answer.

2) Can you guide us through your musical/influence history?
As perhaps could be noted by my Beach Boys tape dubbing, surf was strangely the first kind of music I felt any personal draw to, and I had some Ventures and Surf compilation tapes.  Then I kind of drifted a bit without anything really sticking until Guns N' Roses and Def Leppard and other hair metal, which I was into for a few years.  I'm not sure how I encountered the Ramones, but they were the first punk band I heard, not that I was really aware of punk in any kind of way.  Weirdly they also kind of made sense to me because they covered a few surf classics, which I already liked!  Anyways, in eighth grade I heard the Dead Kennedys from a friend and that was kind of a game changer, though I remained oblivious to any current punk until a couple of years later. I moved to Birmingham Alabama for four years from age 15-19 and it was the small punk record shop there (Next Door Records R.I.P.) that I got into a pretty wide variety of d.i.y. / punk, and it's just kind of continued from there.

3) What do you spend your free time doing?
Free time?  Well, there's not much of it, but when it's not winter I like hiking.  About six months ago I committed to taking one day off a week where I don't work on anything, which to be honest was a bit of a struggle for me, and I don't always achieve it, but it's definitely been a positive change.

4) What do you usually talk about with your friends?
Hmmm, who knows? Current developments in each other's lives? music? vegan grub? maybe gear?  I'm very bad at talking about myself, so I usually try not to do it that much.  I also am bad at making lists of favorites, or top tens, that's just not how my brain works.

5) Tell us about the running of Clean Plate records.
Clean Plate normally doesn't have much work to do in terms of running it.  For the past several years I've pretty much exclusively released music made by friends and when it makes sense for all parties.  What that really means is that I only have a couple of releases every couple of years.  This year is the 20th anniversary of the label, which is kind of crazy though.  Essentially the label is whatever I want it to be, and sometimes that means it's dormant for long stretches of time.

6) What are your thoughts on the word screamo or skramz?
Both seem like bad jokes to me, though I realize they work as valid genre names for some people.

7) Do you generally write the guitar parts or does your creativity extend to other instruments as well?
I think bands work best as collaborative efforts.  I'm always open to suggestions on guitar riffs, and I've certainly been known to suggest a drum or bass part, or vocal placement, but I wouldn't say I "wrote" those parts.  On the other hand, I play drums on DEMONBROTHER, and Won't Belong recordings, and bass on Vaccine, and wrote those parts, at least for the most part.

8) BUCKET FULL OF TEETH is one of my favourite bands of all time, what could you tell us about that project? Will you guys ever do another record? (I can dream...)
That project was unusual for me.  I would write a lot of the song concepts in my head, or on paper, not using a guitar, but trying to map it out conceptually.  Mainly I was trying to push what I felt were the bounds of punk/hardcore, but also to clearly stay within it.  I'm not sure how well we achieved that, and I'm not sure how many people appreciated our approach, but that was the goal.  I think it's safe to say there won't be another record, but for anyone who digs that stuff, I'd suggest they check out the band No Faith that I'm in, it's probably the most similar musical project I've been involved in.

10) How was AMPERE first conceived?
It was pretty simple, we all moved into the same house together and decided it would be fun to do a 'house band.'  I think our idea was to be noisy, not in terms of actual "noise", but just in having some parts that were somewhat abstract, and chaotic.  That idea kind of changed relatively quickly, as like most bands, we started figuring out what we were actually doing once we were doing it, or at least there's nothing abstract in our music any more, but I think it's still about pursuing our own original way to create chaotic music.

11) You only tour about once a year (from what I remember Stephen saying), what are the band's obstacles from increasing that? Or does AMPERE enjoy only playing a few shows a year?
Assuming we're just talking about Ampere, at this point it's just a matter of juggling peoples jobs, vacation time, family, etc.  I would love for Ampere to play more, but it's more complicated than that.  We have been playing more in the past year or two than we were for a couple of years before that.

12) I assume ORCHID is still a band/subject that gets brought up a lot. Is that in the past for you, or do you enjoy discussing about those times?
Well, Orchid is certainly in the past, but I don't have any ill feelings towards that past, and am still in touch with all of those guys to one extent or another.  I'm not one to feel super nostalgic, or pretend that being in that band was much different than being in any other band.

13) What is happening with LONGINGS?
We have an LP that has been slowly being pressed thanks to backlogged pressing plants, but it should be out in September on Framework (US) and Echo Canyon (FR).  We'll be touring to Philly/Cleveland/Chicago/Toronto/Montreal at the end of August (with copies of the European Pressing with us), and plan to go to the West Coast this winter.

14) What is next for Will Killingsworth?
New music in the works from DEMONBROTHER and No Faith, as well as a newer project Absolute Power. For the new No Faith LP features Dave Witte's amazing drumming and I'm really excited about that.  Absolute Power is with most of the line-up of Veins and Chris (Aerosols, Suburbanite, Wasteland, etc) doing vocals.  Meanwhile I plan on recording and mastering a lot of bands, if all continues to go well!  I've been doing a fair amount of mixing for bands for recordings that were done elsewhere and it's a cool challenge that I hope to continue to do more of.
Posted by Dave Norman at 02:31