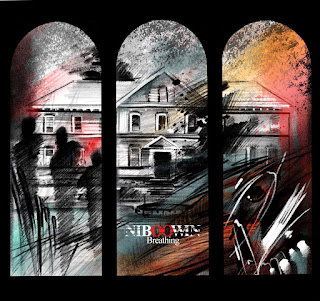 I've been pals with Old Soul (they played the first Zegema Beach Records mini-fest, linked here) and Jimmy Stellwagen for years (we even did two podcasts together, linked here and here). I was made aware of their  new band's existence pretty much from the get-go, as NIBOOWIN is essentially the reincarnation of Old Soul. Don't expect an Old Soul clone, but there are definite similarities, most notably in the instrumental work. That being said, there are definite ties to the raging black-metal that made appearances with NIBOOWIN's predecessor, but little-to-no long, drawn-out and epic sweeps are utilized and therefore no song passes the five-minute mark. I think the best bands to use for the comparison melting pot would be early Envy, ['selvə] and Perth Express.

Their debut recording is a full length record that was released digitally a month or two ago but will be out on vinyl, likely in August of 2018. 'Breathing' begins with "Resting Peacefully", a stellar opener that gives the listener a perfect indication of what's to come with the rest of their record, complete with a ridiculously catchy guitar progression from 2:50 onward. "Raided" and "Careless Conscious are next and it blazes through wicked drums, head-bobbin bass, melodic guitar-work and throaty screams. "New Dawn" may begin softer and slower than the preceding three tracks, but holy ass does it payoff at the end, wowza! I'm not sure if it's a synth or something that kicks in at 4:06 but it gives the song an almost AmenRa and The Flying Worker feel, and damn that is some dark and foreboding goth shit, right there. "Eager Burden" bares a lot of similarity earlier Envy, as it balances the melodic with the chaotic, The second half, by stark comparison, is unrelenting and dark as shit, reminding me most of ['selvə]. "Silhouettes" hooks a mad Envy groove again after about the first minute and it's a thing of beauty, likely to be replicated again very soon 😉. "Chasing Sanctuary" begins like the musical equivalent of waking up peacefully, which floats around for the first 50 seconds before hitting epic post-hardcore/post-metal/screamo, much like the final 7" from Germany's Amber. Closer "Ashes Ignite and Awaken" boasts the most dual vocals the band has employed to date, giving it additional depth to the subterranean hardcore expedition that probably bears the most resemblance to Old Soul. It's also heavy as fuck.

So there ya go, that's the new 'Breathing' 12"LP by NIBOOWIN. It will release in late summer on Zegema Beach Records, IFB Records and React With Protest Records so you'll see pre-orders go up in June or July. Lastly, I asked Jimmy to write a piece about the evolution from Old Soul to NIBOOWIN. And so he did.

Hello this is Jimmy from Niboowin (ex Old Soul). David asked me to do a brief history of Old Soul with the transition into Niboowin. All the rest of the members of OS were in a band called Capacitor which was over-the-top flashy grind, some of which shows in the early stuff and peeks its face out from time to time. Adrian and I were in a band called Quietus, but we split up because the guitar player Casey moved to Marquette and was involved with the fracking protest. Casey also passed away in a tragic car accident in 2016.

OS then asked me to join on guitar to fill the shoes of Joe who is an utterly incredible musician. The first 6 months were quite seriously intensive guitar training for me since I had been primarily a bass player. Before long we had written Nature’s Arms Encircle All as our first full length of a two part record based off the magic the gathering Jaddi Lifesteider card. We recorded it at our good friend Kevin Kitchel’s house in June of 2010. Shortly after recording we discovered pedals and that changed the course of our writing style. As we were recording Who Are Willing to Draw Close we delved into experimenting with sonic soundscapes. We went back to Kevin’s place July of 2011, but there was a conflict of interests in scheduling because “I just got an INFLATABLE FUCKING CANOE BRO! - Kevin”

Our writing style shifted over the years towards the “dreamo” style that we are associated with Tidal Lock being the predominant emotional acid trip. It actually took us a couple years to write, I had moved to Grand Rapids and there was a lot going on in all of our lives. We recorded at Bright Black Earth with Alex Larson in the cold month of February of 2013 and had it mastered by Alan Douches.

Not too long after the release of Tidal Lock we started talking to Lentic Waters and planning a split. Coincidentally around the same time our friend Gabe showed us Nic and we unanimously all wanted to get ahold of them and see if they would want to do a split. While we were writing and recording the splits we started planning for our first European tour with Lentic Waters, Nic and Sky:Lark. There was always the thought that we have never met any of these people and we are even planning a tour with them. Never did we imagine that they would all become some of our most beloved friends and part of our fondest memories. We may have bit off more than we could chew going for 52 days though.

In March of 2015 we headed for warm weather with our dear friends Dakhma from Grand Rapids, which unbeknownst to OS would be our last state-side tour. Also this tour was the catalyst for Dakhma to ask me to join years later.

On a seemingly causal June day in 2015 Nick came to check out a practice and ended up jamming with us as we were writing for Blue Heron. It was unanimous that we wanted him to join as the 6th member of OS. It’s also strange to think Niboowin would not exist right now if that day didn’t happen. I had watched Nick and Dillion’s old bands play but would never would have thought we would all jam later on. They were both really young and still discovering what they wanted to be.

Ok back from the tangent. We booked the entire month of November 2015 at Lakebottom Recording House with JC Griffin and in all honesty it was kind of a triumph of will in recording Blue Heron. From me having a nervous breakdown in the studio, tracks being messed up, Casey’s voice blowing out and the drunkest recording session. We were put on the pint plan to avoid anymore puke cakes. During the session we were all coming to the harsh realization that we potentially had a finite amount of time as a band.

We also started booking the second Euro tour at this time. Jojo from Lentic Waters not-so-jokingly told us we had the worst planned tour in 2014 and we had no intention of repeating that. With the help of Lentic Waters, Nic, DeerintheHeadlights, Eva, Teru and many other people the tour went better than planned. As the tour neared it was clear that this was going to be the final tour at the least. We haven’t all been together since the last day of Fluff Fest 2016. Adrian moved to Germany, Casey moved to Fort Myers, Florida, Steven moved to Midland, Michigan, Mikey moved to Weidman, Michigan and is now the proud father of an adorable little girl named Cadence.

Through OS we met countless dear friends all over the world. It’s hard to fathom how different life would be without the years spent playing music in OS. I rarely felt as though I wasn't at home. Tours with OS were something else, we were always up to something. We were always pegged as a party band... and we definitely were. I don’t know how many bar tops I’ve danced on or ended up sleeping on. On an impromptu visit to Rick James' grave where we honored his legacy in the best way we knew how. We also had many hungover hikes through gorges, caves, forests, mountains and urban jungles. There are so many times I will never forget and many times I will never remember...including the scar on my forehead from CMAR 16. Mikey getting lost in Gent, Belgium for 13 hours. Steven getting swindled out of €400. Casey finding money everywhere we went. Adrian getting a African parasite in his foot that is completely unexplainable. The absolute best send off show at Fluff with so many friends. The 7 years OS tainted this earth were truly incredible and a life changing experience.

Now to the transition that is Niboowin. Nick had been jamming with Dillon for years and some of their first shows were seeing Rejiem and Capacitor which were both precursor bands to Old Soul. In December of 2016 Nick came to me and asked if I wanted to play bass. So I showed up with a guitar and a wacky pedal board to make some fake bass and we started writing. Mikey joined and was active until he found out his partner was pregnant. He decided to step down from music and step into his fatherly role which was shortly after we went to Lakebottom Recording House in April 2017 with JC at the Engineers seat to record our full length Breathing. Finishing it in December, we also decided to send it to Brad Boatright at AudioSiege for a proper master polish.

Besides the apparent differences in our music, where we are leaning towards the black metal faster side of the spectrum. Nick is pulling double duty this time around as a guitarist and vocalist. We also wanted the underlying content of the lyrics to be personal instead of concepts. They vary from personal anxiety, personal hardships, the cultural appropriation of Native Americans, the weight of this world, and merely existing. It’s not our goal to be depressive but to acknowledge life is fucking pain and it is possible to overcome with friends and passions in life. On a lighter note carrying all the gear and merch as a 3 piece as compared to a 6 piece is a lot more labor intensive. On the flip side asking for a place to stay is a breeze, also half as difficult to get work schedules to work for touring. We absolutely have every intention of using the ease of touring to our advantage and being in a band with two young people who are ready to hit the road is something I’m ecstatic about.

We have already gone back to the studio to record more music and hope to have it out this year. We also have plans for tours coming up this year and we are excited for what is to come.