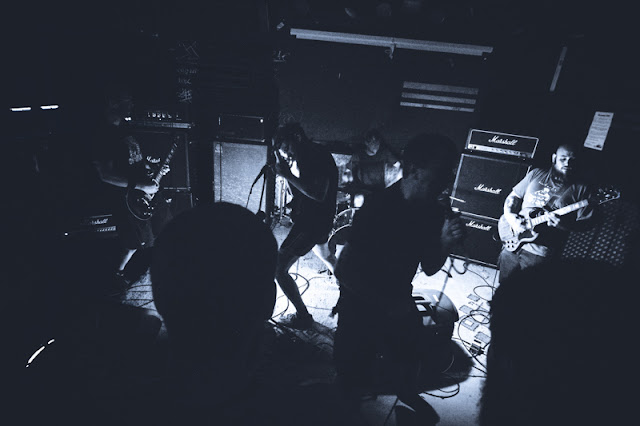 Because Lars from the React With Protest label (and a bunch of unreal German bands) is such an amazing person, as well as his new band SALIGIA only has two songs on a single split 7", I figured that I'd review the Amygdala side of the split as well.

Firstly, SALIGIA is an emo-violence/screamo band from Germany that plays frantic and pummeling hardcore in the vein of Lars' associated acts, such as Republic Of Dreams and The Apoplexy Twist Orchestra. "No Halo, No Crown" is lightning fast during its 2:22 tenure, but does manage to quickly dip into a soft screamo-esque interlude at 1:25 before laying waste to your ears once again. "Phoenix" begins with the towering intro for almost 20 seconds before obliterating the speakers with breakneck drums and intensely fast guitar strumming. Both songs include audio clips about mass consumerism that help lead out track one and introduce track two. A truly striking introduction to SALIGIA that will surely resonate with any emo-violence fan.

Next up on the split is San Antonio Texas' own Amygdala, born but a year ago. I've already reviewed their demo 7" which showed an insane amount of promise here, and on this release they've really hashed out their sound and have a more complete recording that is much more balanced. The screaming on this release is top notch, as Bianca's ultra screamy vocals are mixed perfectly with the spastic yet contained instrumentals. Think Welcome The Plague Year with shorter songs, less jammy interludes and a generally angrier vibe. "You Can't Handle the Truth" is a blast of crust, hardcore, thrash and emo-violence while "Floricanto" is Amygdala's best song to date. The latter harnesses the sheer anger and violence to a deadly degree and sets it loose on the listener for the entirety of its 3:08 length, straddling both chaos and melody within the despair. A seriously killer track.

A really cool thing about this split is that it is a co-release between the bands and their own respective labels. Also, be on the lookout for a 'Saligia 10"' which should be released in spring/summer of 2016. Get fucking pumped.