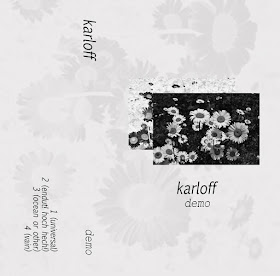 For fans of: Innards, People's Temple Project, The South and Youth Novel
Facebook

KARLOFF is made up of quite a few friends of mine from back in Ontario. Cambridge to be specific. I've known Nate the most, as he took over Canada/Ontario Zegema Beach Records while I was away in New Zealand and basically up until June of 2018. I watched him change from a showgoer to a promoter, vocalist (of numerous bands) and record label. At ZBR Fest 2017 in Toronto, I introduced Nate to Dylan (the ex-bassist for Life In Vacuum who also has played in Death Party Playground, Father Bodies, Ned Flangers and runs 3 Nines Compact Cassettes) who was also helping out huge with ZBR Fest and the two hit it off and exchanged numbers right away. It was beautiful to watch.

Over the course of the last year they did some tape stuff together and eventually formed KARLOFF along with Alberto (also helps run No Funeral Records) and two other members. The original drummer was recently replaced by Chris (of Yonder Peak, Toucan Slam, Sclera, Sill and Kitjohari) and I've been told that the new material trumps this old stuff, which is fucking exciting because I love how amazingly raw and driving their screamy hardcore is, and the nearly non-stop, unrelenting dual-vocals take the cake. Prior to this EP release was the single comp song "5" from the same demo sessions that is housed on the 'KWCDIY Spring 2018 Compilation' linked here.

This new 'Demo' cassette EP is four tracks, all of which are embedded below with song descriptions. The tapes come out on Friday along with the KARLOFF bandcamp page. There will be 50 tapes, 15 as a release show exclusive in a safety pinned cloth bag with a painted "K" on it. You can buy them online at the No Funeral store linked here.

Nate had this to say about the demo:

"We recorded this in one session with very little sleep with our friend Jesse Alarcon of Glue Gun Records. Without going into too much detail - we should have prepared more. But we're mostly happy with it. It's the first release from No Funeral Records, a label spawned from an ex-ZBR employee, co-released with Glue Gun Records and 3 Nines Compact Cassettes."

Back and forth shrieks and broken screams open this phenomenal demo debut track, with the entire thing sounding like a rawer version of Youth Novel, and I'm officially in love. P.S. Dylan I'm lovin' those bass slides around 45-50 seconds. 💓

An obvious and amazing Simpsons reference from the Worker and Parasite show, the second track clocks in much shorter at only 43 seconds (compared to the opener's 2:41) and is abrasive and chaotic, bringing to mind the intensity of Nate's other project Sclera, as all the pretty and melodic parts have been scorched away.

Nearing the six-minute mark is "Ocean or Other". You can't much more 90s emo than this super chill, mostly instrumental jam, as the vocals don't show up until almost 4:30. Nods to bands such as Funeral Diner and Indian Summer are there whether intentional or not, and I find this song perhaps the strongest on the EP as it really delves into other genres and finds the band exploring many different aspects of their sound.

"Vain" is the closer and has some pretty gosh darn tongue in cheek lyrics. It goes pretty hard until 25 seconds when they cool their jets and settle into a bit more of a groove. I found band comparisons for KARLOFF rather difficult to come by, but this song sounds a lot like The South to me (in a good way).

Nate and the rest of the No Funeral Records gang did a podcast with me a ways back, linked here.

Here are the label links and info for the 'Demo' cassette:

And lastly KARLOFF is playing a few local shows (Cambridge/Kitchener/Waterloo and the fest in Owen Sound) so here are they are with their corresponding facebook links.